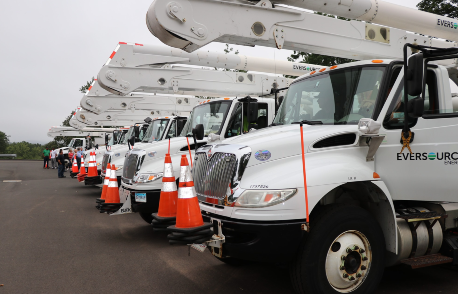 Eversource, CMP and other power providers still have a lot of work ahead of them to complete the restoration effort. (Courtesy photo)

As the second storm of the week pummeled Rochester on Sunday most city households escaped the nightmare of power outages, but by the end of the day on Monday, after 24 hours of relentless heavy snow and sleet, almost 15 percent of Eversource customers there are in the dark today.
The Rochester Voice reported on Monday that a little more than 200 Lilac City households were in the dark. Today as of 6 a.m. it's up to 2,525.
Dover, which had listed 1,452 household outages on Monday, saw that number swell to 7,069 today, some 40 percent of Eversource customers, according to their outage map.
Several other local cities and towns still have a ways to go before restoring power to residents.
In Barrington, about 3,000 homes remain on the outage list, about 40 percent of town customers.
Somersworth still has 1,579 household without power, about 24 percent.
In Maine, much of Berwick is still in the dark, with 2,480 households without power, about a third of CMP customers in that town.
Farmington still has about 250 customers suffering outages with Milton faring better with about 30.

A statement from Eversource on Monday noted that hundreds of Eversource line, tree and service crews are working to clear damage, repair the electric system and restore power to customers as the winter storm currently hitting New Hampshire is bringing trees and tree limbs down and causing power outages statewide. "Combined with the snow already on trees from recent storms, the additional heavy, wet snow and strong winds in the forecast today are likely to cause further damage to the electric system and additional outages," Eversource officials said on Monday.

The energy company's lineworkers and remote system operators have restored power to more than 50,000 customers since the storm began Sunday night, according to Eversource numbers.

"On top of the snow buildup and weakened trees from other recent storms, the winter storm hitting New England is bringing trees and limbs down onto the electric system and causing significant damage in nearly every region of the state," said Eversource President of Electric Operations in New Hampshire Doug Foley. "With more heavy, wet snow in the forecast and breezy conditions picking up through the day, further damage and outages are likely, and we thank our customers for their patience as driving conditions remain challenging for our crews."

In all, about 670,000 Mainers remain in the dark today, while the same plight is suffered by some 60,000 Granite Staters who are waiting to see the light.