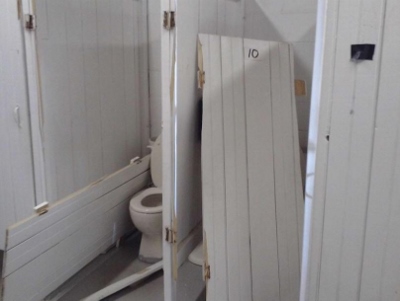 A ladies bathroom at the Rochester Fairgrounds that was recently vandalized. (Rochester Police photo)

ROCHESTER - Rochester Police are asking for the public's help in an investigation into vandalism at the Rochester Fairgrounds.

Police say in June it was found that a women's bathroom at the fairgrounds had been damaged by an unknown suspect or suspects who tore wooden doors of their hinges and broke a mirror.

An investigation thus far has produced no leads, police say.

Anyone who may know something about the incident is asked to contact the Rochester Police Department at 330-7128 regarding case number 16-3118-OF.

Tipsters can also provide information and remain anonymous by calling the Rochester Crime Line at 335-6500 or Text to: CRIMES (274637) Body of Text: TEXT4CASH + your tip. Cash rewards are offered for information that leads to an arrest.