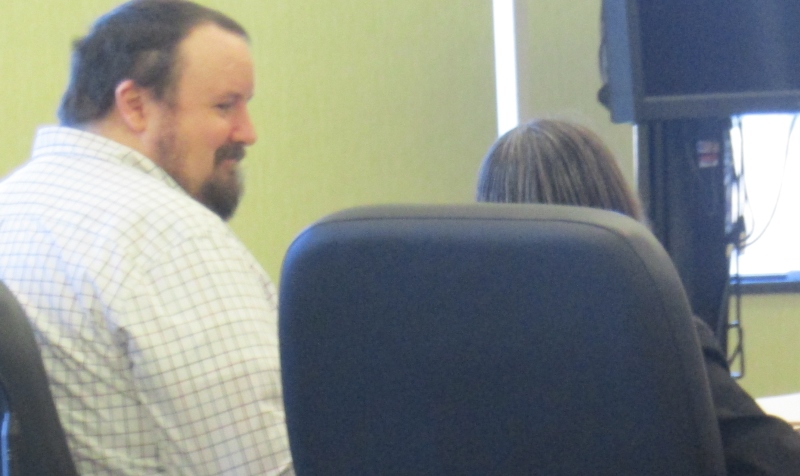 Accused murderer Timothy Verrill smiles as he chats with defense lawyer Meredith Lugo on Friday, a day after a mistrial was declared. (Rochester Voice photos)

DOVER - The public got an inkling on Friday as to how the murder case in the deaths of two women in Farmington in January 2017 will move forward after a mistrial was declared on Thursday due to discovery issues.

Assistant Attorney General Geoff Ward, the lead prosecutor in the case, told The Rochester Voice in an exclusive interview that he and his staff will be spending a lot of time with State Police after it was found their lead investigator in the case bungled the required dissemination of evidence to the defense through what Ward called, "negligence and mismanagement."

"For the next two weeks we will be at state police headquarters every day to work with command staff, personally reviewing each and every document in this matter so we're able to tell the court we've done that and ensure that we have in fact received everything that we should receive," Ward said.

On Friday Strafford County Superior Court Judge Steven M. Houran noted that two more recorded interviews had been found not to have been shared with the defense as well as 100 pages of emails and texts between witnesses and investigators. Ward said the extent of the amount of evidentiary material not shared is still not clear.

The prosecution made no argument against the defense's motion to declare a mistrial, however Ward said they are hopeful the case against accused killer Timothy Verrill can still be retried.

Verrill, 37, of Dover, is accused of first first-degree murder in the Jan. 27, 2017, deaths of Christine Sullivan, 48, of 979 Meaderboro Road, Farmington, and Jenna Pellegrini, 32, of Barrington. He faces life in prison without parole if found guilty.

For now, the charges remain in effect and Verrill remains in jail, Ward said.

Meanwhile, defense attorneys Julia Nye and Meredith Lugo will likely seek dismissal of the case "with prejudice" when they meet with prosecutors in Judge Houran's courtroom on Nov. 14.

If the case is "dismissed with prejudice", Verrill would go free and could not be tried on the charges again. If it is dismissed "without prejudice" he could be retried, said Ward.

A relaxed Verrill, dressed in a tattersall shirt and slacks, smiled and chatted with his defense attorneys during Friday's hourlong court session, which began with Houran's thanking jurors for their service in the aborted trial and ended with the cross-examination of defense witness Scott Pelletier of Middleton, whose direct testimony was heard late Wednesday afternoon.

During his cross-examination by Ward on Friday, Pelletier told the court he had a romantic relationship with Sullivan and that Dean Smoronk, Sullivan's longtime boyfriend, had said he had no problem with it.

Smoronk has been a key focal point for the defense team of Lugo and Nye, who have argued that he either committed or orchestrated the killings.

Pelletier, who said it was a very brief romantic relationship, testified that Sullivan was planning to leave her Farmington house to live in Maine "a matter of days" from when she was killed.

Pelletier also spoke of the trip he made with two acquaintances to the Farmington house a day after the women were killed after one of the acquaintances told him he'd seen a large amount of blood on a mattress in a guest bedroom at the house.

As one of the acquaintances stayed outside, a concerned Pelletier said he went into the unlocked house with a friend named "Buddy" and called for both Sullivan and Pellegrini.

When he saw the blood in the bedroom where Pellegrini was staying he said he was shocked by the amount of blood on the mattress and loudly said, "Wow."

He said Buddy came into the room and remarked, "Miscarriage."

Pelletier also said while at the house he noticed the smell of bleach in the air like someone had been cleaning and shreds of a blue tarp that was found throughout the house, in the teeth of a vacuum cleaner and in the snow near the garage.

He said they left the house within 10 minutes and drove to Somersworth hoping to find Sullivan at a storage unit she rented, but she wasn't there either.