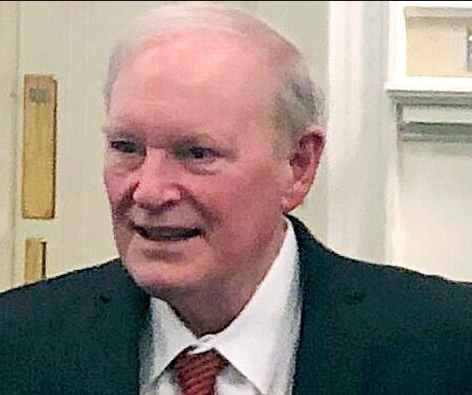 CONCORD - A public memorial service for former Attorney General and Governor Stephen Merrill will be held outside at the State House Plaza in Concord on Friday at 12:30 p.m., the governor announced on Monday.

The public is welcome to attend to honor and celebrate his life and dedicated public service.

Merrill, who served two terms in the 1990s, died Saturday morning at his Manchester home, according to statements by Gov. Chris Sununu and the Merrill family.

Merrill, a Republican who coined the phrase "The New Hampshire Advantage," was 74.

Merrill died peacefully surrounded by family, his family said in a statement. His cause of death was not disclosed.

"Additional information about remembrance services will be forthcoming. We ask that you please respect the privacy of our family at this difficult time," the statement said.

Merrill was the state's attorney general before being elected governor in his first run for public office in 1992. He was re-elected in 1994.

Sununu described Merrill as a "dear friend who had an incredibly positive impact on the citizens of our state. He will be missed by everyone who knew him."

The New Hampshire Republican Party released its own statement Saturday as news of Merrill's death came out.

"We are deeply saddened by the passing of former New Hampshire Governor Steve Merrill, whose dedication to New Hampshire was exemplified through his public service as our state's Attorney General and our 77th Governor. Our thoughts and prayers are with the Merrill family at this time."

U.S. Sen. Jeanne Shaheen, a Democrat who succeeded Merrill, called him a "reliable confidant who offered insight and advice" when she took over the governor's office in 1997.