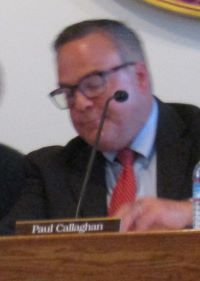 Why limit public hearing testimony Mayor Callaghan?
RSA 32:5 Preparation of Budgets states the city shall hold at least one public hearing on each budget, and after the conclusion of public testimony shall finalize the budget to be submitted to the legislative body.
This is in law because, under due process, we have a right to give testimony and be heard when our property is being taken from us by our government. In my opinion, we were denied full due process on May 17th at the only scheduled budget public hearing.

Instead, Mayor Callaghan took it upon himself, as the very first thing, to limit public testimony to five minutes. Why? Was there something more important to do than listen to the people who elected him? A game on the tube perhaps? Did he have to go somewhere. Please ask him why when you see him.

Our 2022-23 proposed budget, available on-line, is approximately 400 pages. It requires spending $150 million with $73.5 million in taxes coming out of our life-savings to pay for it. FIVE MINUTES! That's all you allowed us to testify. In my case, using my current tax bill, that's $1,000 dollars a minute it cost me to speak! As a note, the minutes of that meeting show there were only seven people who gave budget testimony. SEVEN brave souls who challenged the council chamber of scrutiny. I challenge every city council member to go over every question or comment in the 400 page budget in full in 5 MINUTES. You can't do it because it can't happen. But, the brave seven who dared speak, were forced to do just that.

Point 2. We are not a home rule state. Cities and towns can only act on the authority that state statutes grant them. RSA 32:5, is silent on time limits for public hearings, as is Rochester City Council Rules of Order. Mayor Callaghan, according to memory and the minutes, when asked which statute gives him the authority to place a time limit on testimony required by law, "announced there is no state statute, but there is case law supporting the limit." Case law? Really? How about real New Hampshire law, of which you are supposed to follow?
As a state legislator, I have access to research services and I requested to find out why we require public hearings in law (RSA 32:5), in case I missed something. The response: " As you know, a public hearing requirement is contained in many statutes. Public hearings enable the general public a chance to be heard and to offer input on issues that come before the municipality. For example, the expenditure of public funds or matters affecting a person's property require a public hearing. It would appear this is simply part of democratic due process rights."
Have our democratic due process rights been trampled by Mayor Callaghan? Is he getting bad advice from someone, even though I advised him prior to the public hearings on April 19th, not to put any time limit on public hearing testimony required by law.
I have filed a complaint with the Department of Revenue Administration of my concerns about the budget process being "tainted' by the denial of due process. That is the first step. We will see where we go from there. Of course, the simple thing would be to have LEGAL public hearings without time limits and without trampling on our due process rights. We shall see what we shall see.
Cliff Newton is a longtime Rochester resident and serves as State Rep Strafford District 9