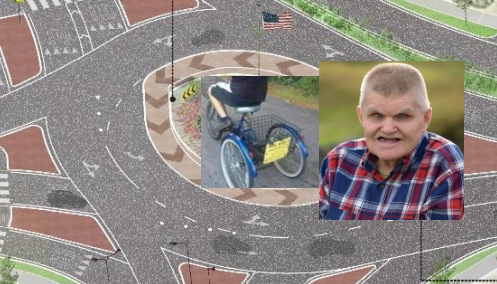 Many are calling for a dedication to Joe Hooper at the roundabout at the intersection of Walnut, North Main and Washington streets.

ROCHESTER - A decision on how to best memorialize the life of Joe Hooper is now in the hands of the city's community development committee.

City Councilor Donna Bogan, vice chair of the committee, said they'd take it up at their next meeting.

City Councilor Jim Gray noted that the city had received an email urging a fitting tribute to Hooper, a beloved Rochester resident known for his winning smile and ubiquitous travels about the city on his famed trike.

Hooper died on July 28 at the age of 75 after suffering a major stroke earlier in the month.

Soon after his death many residents took to social media to express their desire to have a fitting tribute to one of the city's favorite sons, many of them embracing the construction of a memorial including his trike at the center of the soon-to-be-constructed roundabout at the intersection of Walnut, North Main and Washington streets.

Hooper's Circle was oft-referenced as a moniker for the rotary as well as the more informal "Hoop-a-loop."

The Hooper Circle suggestion quickly garnered 1,300 likes and 556 comments on the "You know you're from Rochester, N.H. if you ..." Facebook page.

Mayor Elaine Lauterborn initially suggested the project go to public works, but consensus was soon reached that the community development committee would be a good starting point.