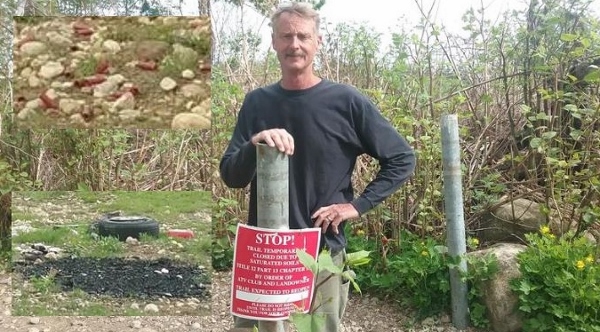 Tom Potter stands astride a sign that prohibits trail riding. Moments after we entered an ATV rode right by us. Insets, a pile of spent shotgun shells out at the former gravel pit, a dumped tire and remnants of a recent campfire. (Rochester Voice photos)

LEBANON, Maine - Lebanon's Conservation Commission has scheduled a walk to a proposed Town Forest this Sunday.

While they make the mile-long trek into the 270-acre parcel they should be ready to scramble to the side of the cow path known as Hebo Hybo Road at any time as ATVers and dirt bikes may scream past them, says Tom Potter, who owns much of the land on the south side of the road.

A referendum on Tuesday's Town Ballot will ask residents if they want to make the woodlands and marsh parcel a permanent Town Forest.

Potter, along with others in the area including Ernie Lizotte, is deadset against the proposal.

On Monday he said the volume of ATVers on the non-maintained and discontinued public way has recently heated up with the onset of summer.

"In less than 30 minutes I saw 37 ATVers go down the road on Saturday," he said earlier this week.

While many were leaving around dusk when he saw them, Potter, who owns the nearby campground Potter's Place, said the activity is going on out on land comprising the proposed town forest all night long.

Near a former gravel pit at the head of the proposed forest, evidence of campfires, discarded tires and spent shotgun shells bespeak of much of the activity that goes on there.

A 24-year Marine who retired as a master gunnery sergeant in 2002, Potter said he hears the yelling and wild carrying on by young ATVers all night long, but has never entertained thoughts of confronting them.

"Hey, I was a Marine, but even I wouldn't go out there alone," he said.

Potter and other abutters of the Hebo Hybo Road and the proposed forest all have concerns about the lack of enforcement and oversight of the land if it were declared by voters a Town Forest that welcomes the public.

Meanwhile, on the other side of the argument, are members of the Lebanon Conservation Commission and the town's Board of Selectmen, who say making it a Town Forest is the first step to establishing a wonderful town asset that can give residents a place to enjoy nature and go hiking and horseback riding while protecting valuable wetlands and watershed.

Strict rules on what types of recreation would be allowed on the property have not been codified, but Conservation Committee Chairman John Bozak said on Tuesday that those details would be worked out in public hearings and discussion.

If the town forest is approved, "We're going to have a sitdown and public hearings about developing a management plan to accommodate a variety of uses and also resolve conflicts of uses," Bozak said.

While Conservation Commission statements refer to allowing only "low-impact" recreation and Bozak said they "don't want to be degrading resources like wetlands or watershed," the decision may be to allow some areas for motorized (ATVs) to operate. He added it wouldn't be any different from some public areas of the White Mountain National Forest where there are designated ATV-approved areas.

Potter, however, said there is no low-impact recreation going on now at the site of the proposed town forest and never was.

"There's no horseback riding, there's no hiking, no mountain biking," Potter scoffed, just ATVs, dirt bikes and other off-road vehicles that slide through barways and other egress points to ruin his hayfields and pastures.

Another recurring problem is the relentless dumping of trash near the old gravel pit, including shingles, tires, appliances and other refuse.

Potter said he's taken dumpload after dumpload to the transfer station over the years.

Potter said the town has shown little desire to keep people from dumping trash there. He said a gate at the end of Lebanon's section of Hebo Hybo was never fixed after it was broken shortly after it was installed in 2010.

Potter said the gate lock had been shot off a long time ago, but the town never fixed it.

"I do straightening when it gets ripped off and try to keep it in shape," he said. "But there's an opening on the side - 60 inches or better - where a dirt bike or ATVer can get through anyway."

And get through they do. In fact, State Police, Lebanon Fire and EMS and Maine Forest Rangers have all been up there on various emergency calls. Even the Highway Department has been up there to help remove trash, Potter said.

And not too many years ago, a motorcyclist was killed on the Hebo Hybo road. He was airlifted from one of the nearby fields before succumbing to his wounds. A memorial stands to the north side of the road about a half mile in.

But while many safety officials and police have had many an occasion to respond to the area, Potter says there's no law enforcement plan to keep folks safe if voters make it a town forest, which would likely increase public traffic.

In fact, Potter says the plan in place now shows "no clear definition of what 'recreational activity' would be allowed and "no control or enforcement plan."

"It's just like the marijuana law," Potter said. "They pass a law and look what's happened. It's a mess."

Still, Bozak sees Tuesday's vote as just the beginning, saying everything can be worked out through public discussion and input, but notes additional funding may be required to fix the gate and egress points if that becomes necessary.

"We have funds to allow us to develop signage and spend money on a management plan, but the rest will evolve over time," he noted.

But even egress points are at issue as the Hebo Hybo Road runs for four and a half miles to Milton Mills Road in Acton, which has not gated its end.

And while questions swirl about enforcement and what types of recreation should or would be allowed, the very status of the Hebo Hybo road, itself, also may be up for interpretation.

The road is no longer maintained, having been "discontinued" in 1928.

In the 1980s the town voted to close the road, however after a landfill threat evaporated, the town found that under Maine law it could be re-established as a discontinued public way, Bozak said.

"If someone was hurt there the town insurance would cover it, and I think Gully Oven is a lot more dangerous than this," he said.

Lebanon Selectmen Chair Chip Harlow said towns have broad immunity when it comes to liability on a public way. While acknowledging anyone could sue if they were injured on the road, he sees little exposure for the town.

He said selectmen unanimously support the Town Forest question because it "puts it under town management and makes it more useful to residents." He added "Visibility may help the problems out there."

Bozak will lead the walkabout on Sunday. It starts at 1 p.m. at the Hebo Hybo Road off Bakers Grant Road. Potter said he'll be there, too.