Ready for takeoff: Wings and Wheels puts on yet another high-flying extravaganza 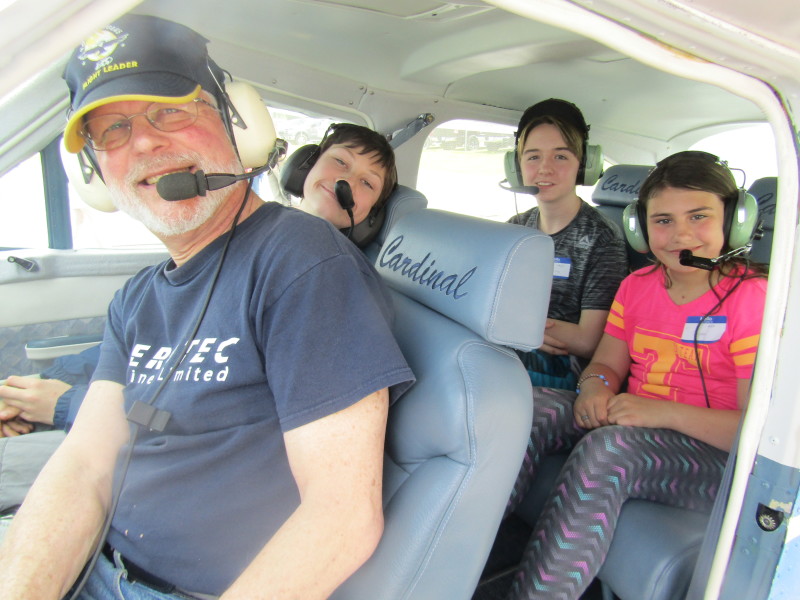 But it was no joke, but an absolute thrill for three local youngsters whom he took on a 20-minute plane ride in his Cessna 177 on Saturday during Rochester's hugely successful annual Wings and Wheels event at Skyhaven Airport.

"This is my first plane ride," nodded Jayden Bodge of East Rochester, who was there with her mom, Mary Beth, who said her daughter was tremendously excited about her first time off solid ground.

Meanwhile, Ortmann, took several minutes to explain that like a boat going through waves, his Cessna, commonly called a "Cardinal," often hit air pockets near the ground that might cause slight turbulence.

He also assured them that if anyone got too scared, he'd immediately land the plane. But this looked like a sturdy bunch, all smiles as they taxied onto the tarmac.

Ortmann, who formerly lived in Rochester before moving to Maine several years ago, said it was very satisfying to introduce young men and women to something he enjoys doing so much.

The Young Eagles flights were just one of the major attractions of this year's Wings and Wheels, which was organized and presented in a combined effort by local organizations including the Rochester Police Department, Rochester Rotary, Skyhaven Airport and Pease Development Authority.

One of the new vendors this year was Damsel in (Distress) Defense of Somersworth, whose line of female defense tools such as stun guns and pepper sprays were arrayed

Nichole Marcin said the two items are her biggest sellers and can be used without a license or permit. She said stun guns run from $65-$85 and are designed to be able to give a threatened individual a few seconds to get away after being applied to the threat. Pepper sprays ranged from $14-$22, she added.

One thing that was no threat on Saturday was the weather, which featured clear blue skies perfect for flying with the Young Eagles or, for $40, in a helicopter provided by Seacoast Helicopters of Portsmouth.

But if you wanted to stay on the ground, there was still plenty

to do, with scores of antique cars, police and fire vehicles for kids to explore, dozens of vendors, food trucks and a bluegrass band set up under a canvass tarp if you wanted to get out of the sun for a while.

Daryl Mcgann and Josephine Doroja took advantage of the Cedar Mountain Bluegrass Band bands stylings to dance under the sun.

Mcgann said he'd recently moved to Rochester from Portsmouth, and while the commute wasn't always easy, he was really enjoying his new hometown.

Also loving it on Saturday was four-year-old Greyson Berry, of Rochester, who had his caricature drawn by a professional who was donating all of the proceeds to Rochester Rotary Charities.

His mom, Cyndi Berry, looked on as her son smiled beamed being caricatured and photographed by The Rochester Voice at the same time.

Much of the spirit of the event was in the giving, with all proceeds from donations received at the gate and many vendors going to local Rochester charities.

Volunteers manning the entrance as the event wound down shortly before 3 p.m. said the crowds had been strong and steady throughout the day.