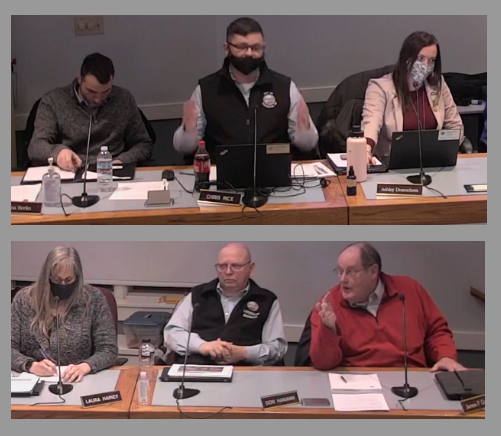 City Councilor Chris Rice, top center, telling fellow councilor Jim Gray not to talk to him about how things work in Concord. At bottom right, Gray asks if he can answer Rice's charges and is denied. (Rochester government channel screenshots)

Gray told The Rochester Voice on Friday that he hopes to set the record straight during tonight's meeting.

"I will be making a presentation to the City Council," he said. "New Hampshire Constitution Part Second Article 11, which was referred to last Tuesday, is misunderstood by many including members of the Rochester City Council."

"In theory all three reps could be from Milton," Rice said. He then named the Republican reps who voted for the plan, including Mac Kittredge and 'Volumis" (incorrect name), sparking Gray to call for a point of order during which he said City Council rules "takes a very dim view of city councilmen calling out other people ... and right now Councilor Rice's position is over the line."

Rice replied he "was stating facts." He then turned to Gray and added, "And before you give me a lesson on how things happen up in Concord ..." prompting Mayor Paul Callaghan to use his gavel the first time.

"We're ending it right here," Callaghan said before moving on to other council business.

Rice, a Democrat, who lost a challenge to unseat Gray from his District 6 Senate seat in a bitter campaign two years ago, has snipped at his former opponent often this past term.

During a hotly contested 2020 District 6 Senate race Gray and Rice traded charges over illegally placed signs, financial statements and Rice's referring to Gray as "a monkey."

Gray's presentation tonight will come toward the end of the City Council workshop, which follows a 6:30 p.m. Public Hearing on fiscal year 2023 Community Development Block Grants.