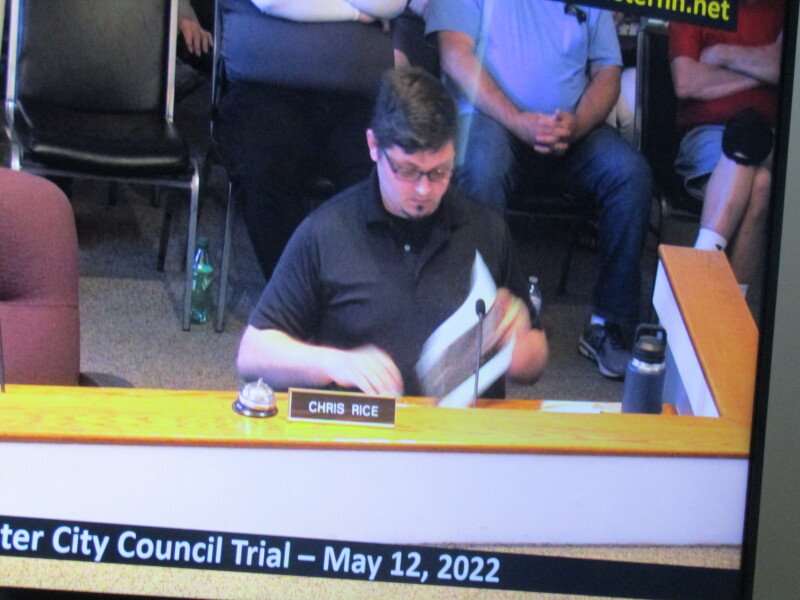 Chris Rice collects paperwork during his trial on Thursday at City Hall. (City of Rochester screenshot

ROCHESTER = It took a tortuous two and a half hours and often seemed chaotic, even out of control, but in the end the City Council for the first time in modern history voted 9-3 to remove Chris Rice from the council on charges of harassment of fellow councilor Ashley Desrochers, making fraudulent statements to city staff and retaliation against Mayor Paul Callaghan and Desrochers.
Moments after the removal vote was tallied as Rice collected his paperwork at the lower dais beneath councilors, Rochester Mayor Paul Callaghan said the words Rice didn't want to hear.
"Mr. Rice, you are no longer a city counselor," Callaghan said quietly. "Return all city equipment immediately."
Rice moved about the room for a few moments, brushing off an attempt by The Rochester Voice for comment and ducked outside City Hall's south exit.
All and all the trial was wrought with raw emotion from start to finish with Rice frequently sparring with Callaghan and Investigative Committee Chair and Deputy Mayor Pete Lachapelle, who led the prosecution.
Coming to Rice's defense frequently were fellow counselors Dana Berlin and Paula Hainey, who both said Rice's actions didn't rise to the level of removal.
The trial often plodded along clumsily, in part because something of this sort had never had to play out before.
In summing up his closing arguments against removal, Rice claimed the investigation and trial had been rushed, that there was no due process and that he objected that two of his accusers (Callaghan and Desrochers) were sitting in judgment of him.
Lachapelle in his closing argument said there was due process and that Rice had shown a "pattern of harassment and lies."
"We are here tonight to correct this and ensure all employees, businesses and residents that this type of behavior is unacceptable and will not be tolerated," Lachapelle added. "I believe everyone has a moral compass. Unfortunately Councilor Rice's compass needs to be recalibrated. If the city manager had done this, he'd be fired. Councilor Rice deserves to be fired for the good of the community."
Following closing arguments the City Council deliberated in open session for five minutes on each count before returning "True" (guilty) votes on all four, but it was the final count of retaliation and deliberation thereon that likely sealed Rice's fate.
The retaliation charge was a result of allegations that Callaghan said he was told by Rice during a phone conversation that he would make the mayor's and Desrochers' life "a living hell for the next two years" after Callaghan said Rice would be investigated
During deliberations prior to the vote, Berlin told the mayor, "I don't believe what you said, and you've given me no reason to believe what you said."
Lachapelle retorted that after Callaghan took the call he reported it immediately to City Manager Blaine Cox.
Desrochers, then stated her concerns.
"There was a threat to me over the phone, and I was disturbed by it," she said.
Then City Councilor Jim Gray referred to the section of an investigative report the indicated Rice allegedly told Desrochers he carried a gun.
"Whether or not this was an intimidation technique, it's how that was received (by Desrochers)," Gray said.
The retaliation verdict was True, with only Hainey and Berlin voting against.
The final deliberations of the night were on whether to remove Rice from office, which featured more discussion about Rice's comments to Desrochers about carrying a gun.
Gray said Rice's comments to Desrochers rose to the level of removal.
"If those two are having a problem then you point out you have a gun, that to me is over the hill," he told Rice. "That's where I draw the line. That's where I'm sure (it would lead) a young woman to want to be escorted out of the building when that individual is around," something Desrochers said she had been doing.
Desrochers added that, "I have loathed this process. I did not report it. I cooperated. The comment about the gun and the actual flashing of the gun, which I believe ..."
"Objection your honor," Rice blurted from his chair.
"No, you can't object," Callaghan replied.
"No, no ..." Rice implored the mayor again.
"This is deliberations," Callaghan retorted.
"This is hearsay," Rice fumed. "This is political slander."
Desrochers continued, "that (the flashing) occurred before this investigation started. If I had known about the retaliation comment that were said to Mayor Callaghan that we have now said it did happen .. if I had known that that occurred, I would have been even more disturbed."
It should be noted that nowhere in the investigative report is Rice's "flashing" of his firearm noted.
Prior to voting on whether to remove Rice several councilors asked City Attorney Terence O'Rourke if there were any other options to present as optional, less punitive remedies.
O'Rourke said there was either censure, which is just an official rebuke and nothing more; and there was removal from his chair on the public safety committee.
After exploring other possible sanctions, Lachapelle reminded councilors in a passionate plea that they were there to exert justice and that's what they should do.
"We're here for a reason tonight, and we are the judge," said Lachapelle, who then slapped his own wrist. "Just giving a slap on the wrist and you know what, just don't let it happen again, and we're sending the wrong message. I'm getting no joy. I have nothing personal against Mr. Rice, What I have personal about Mr. Rice is what was presented to me and in the committee. What's wrong is wrong and what's right is right. We voted all four counts by unanimous that he was guilty."
Looking directly at Rice he added, "You dug your own grave, and now we're going to fill it."