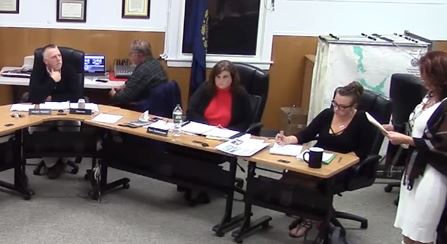 MILTON - Selectman Mike Beaulieu's negative comments last week regarding the job performance of Milton's town administrator were met with widespread condemnation on Monday including a letter from town department heads and a petition from residents calling on him to resign immediately.

Most scathing was the letter from town department heads and read by town clerk Michelle Beauchamp excoriating Beaulieu's management style and treatment of town employees.

Beauchamp, reading from the letter, said Beaulieu had "created a hostile work environment" and "exhibits unprofessional harassing and inappropriate behavior by verbal abuse, intimidation and bullying tactics." Those tactics, she said, have "destroyed the morale of employees and forced employees to fear unjust disciplinary action."

The letter ended with department heads expressing "no confidence in the ability of Selectmen Beaulieu to lead the town of Milton or its employees" and asked for his immediate resignation.

Selectmen were also given a citizens petition circulated over the weekend and signed by 50 residents asking for Beaulieu to step down.

Beaulieu, who was not at the meeting, said during a budget workshop on Wednesday that he wanted to change his vote on the town administrator budget from "yea" to "nay" because he was "not comfortable paying $70,000 a year to someone who hasn't really put in a full week's work since she started."

Selectmen's comments that can injure the reputation of town employees and/or private citizens are mandated to be only taken up in executive session per state statute.

Rawson and Thibeault initially decided not to make any motions demanding Beaulieu's resignation during the regular meeting on Monday, but later in executive session they did and returned to pubic to demand his resignation within seven days - by Nov. 13.

In September Beaulieu stepped down from his job as code enforcement officer for the town of Lebanon, Maine.

Since then Lebanon town officials have referenced his lack of oversight with regard to Shoreland Protection ordinances mandated by the state and town.