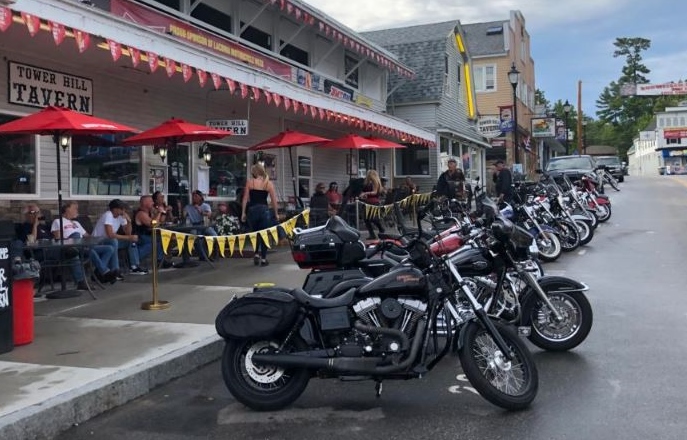 CONCORD - Restaurants across the state can all go to 100 percent indoor capacity for dining as the state continues to see lower COVID-19 numbers and loses one of the worst outbreaks at a long-term care facility.

Gov. Chris Sununu announced the decision to allow all restaurants and bars to become fully open during a Friday press conference, saying he is a bit surprised by the fact that the state is seeing even fewer new cases of the coronavirus than he expected for this time and the numbers continue to stay low over the past few weeks.

It also comes a day after restaurant owners from southern and eastern counties which have been limited to 50 percent indoor capacity were pleading with the Governor's Economic Reopening Task Force to allow for more capacity.

While the six northern and western counties have had 100 percent capacity allowed for months, the counties where COVID-19 cases were the highest were limited to 50 percent indoors. Those are restaurants in Hillsborough, Rockingham, Strafford and Merrimack counties.

Effective immediately they can seat 100 percent of their capacity.

Sununu said he did look at opening restaurants at 75 percent but knowing that there have been no outbreaks or major issues coming from areas of the state which had 100 percent open and the statistics trending downward "it made sense," to fully open up the regulation. He said he was unsure how that might impact weddings.

Sununu said he is "surprised our numbers are so low," and he said the time to help restaurants open up is now noting some are economically hanging by a thread. "If you do it too late it's too late," he said.

Statistics
Dr. Benjamin Chan, the state epidemiologist, said COVID-19 numbers in New Hampshire "continue to look good," though globally there are now 22.7 million cases and in the United States, 5.5 million where more than 174,000 have died.
New Hampshire reported 24 new cases Friday for a total of 7,071 total since March.

There was one new hospitalization reported Friday for 709 patients, which is actually a decrease from prior numbers due to data checks. Four cases that were previously listed were not COVID hospitalizations after all.

There were no new deaths to report Friday, leaving the state's fatality rate at 428 total.
"We continue to see low but persistent community transmission," Chan said, noting the state has held an average of about 20 new infections per day for a week or more and the percent positive on PCR tests is still less than one percent and has also stayed that way the last week.

Lori Shibinette, the state commissioner of Health and Human Services, also had some good news to share at the press briefing. She said the state was closing a long-term care outbreak of the virus at Greenbriar in Nashua leaving only one long-term care facility in the state facing an outbreak of three or more cases of COVID-19. That is at Evergreen Place in Manchester. Greenbriar had a total of 124 residents and 34 staff test positive for a total of 158 and 28 deaths were reported at Greenbriar so far.

Seasonally adjusted rates of unemployment continue to trend downward with the state's rate now at about 6.2 percent. In March, before the pandemic closed scores of businesses, it was 2.4 percent.
"We are on a really, really good track," Sununu said.

This weekend starts the nine-day Bike Week, the 97th, and motorcycle enthusiasts are coming to New Hampshire.
Sununu said his staff and state health officials are working closely with all those involved in the rally who host various events to review guidance documents.

Sununu said he feels cautiously optimistic the rally will not lead to a spike in COVID-19 cases here and a super spread event just before children go back to school. He reminded visitors from out of state to review travel quarantine restrictions for all outside of New England, which is 14 days prior to arrival, and a mask requirement for events over 100 people.

"If there is a need for a public notification we will do that if we think we need to notify the public," Shibinette said.

She noted that it is likely that the state will receive out-of-state information if someone who comes here and goes home and becomes sick. Sununu said it is hard to know how many people will be here for Bike Week from outside of New England because the state Department of Transportation "does not follow license" plates.

GOFERR.NH.GOV/TRANSPARENCY
You can go to the above website to find where the total $568 million of the $1.25 billion federal CARES Act money has gone so far in the state.

Sununu said there are a number of ways the state may proceed in a fight with Massachusetts over taxes being collected there for residents of New Hampshire who work in Massachusetts but have been prevented from going into the Bay State to work due to COVID-19 restrictions. This affects about 84,000 people.

Sununu said a few weeks ago, the state launched an investigation and review into Massachusetts state Department of Revenue's attempts to collect. He said on Aug. 27, that agency in Massachusetts will hold a hearing and he urged those impacted to submit written testimony to have their voices heard at rulesandregs@dor.state.ma.us.

Sununu called it a key issue and rejected assertions that he is blowing the issue off. There are a few potential grounds for a suit, Sununu said, and the Attorney General is working on it. He said citizens are being taxed unfairly and there are a number of legal remedies to pursue.

Sununu said as fall arrives, people should be willing to look at the impacts the pandemic is having on their mental health and get help as they would with any other physical ailment. He said social distancing is having negative impacts like anxiety, depression, isolation in many adults and children and COVID-19 has caused or exacerbated this difficulty.

"We want to make sure we are addressing this. We are not waiting for the tsunami," Sununu said. Fall, he said, is a great time to build good habits and "know what support systems are out there....it is directly related to the COVID crisis."
He said extended time online is having an impact on kids and families.

To explore help, go to nh.gov/covid19 to a button that says "mental health stress and anxiety support." It is tough, he said, to acknowledge that there could be issues, but mental health is like any other health issue.

Sununu said he will maintain the capacity levels now in place for retail and tourist attractions noting those places are different than a restaurant where people are required to sit down. It is different than walking around a general store where it could be hard to maintain six feet of social distancing, he said.