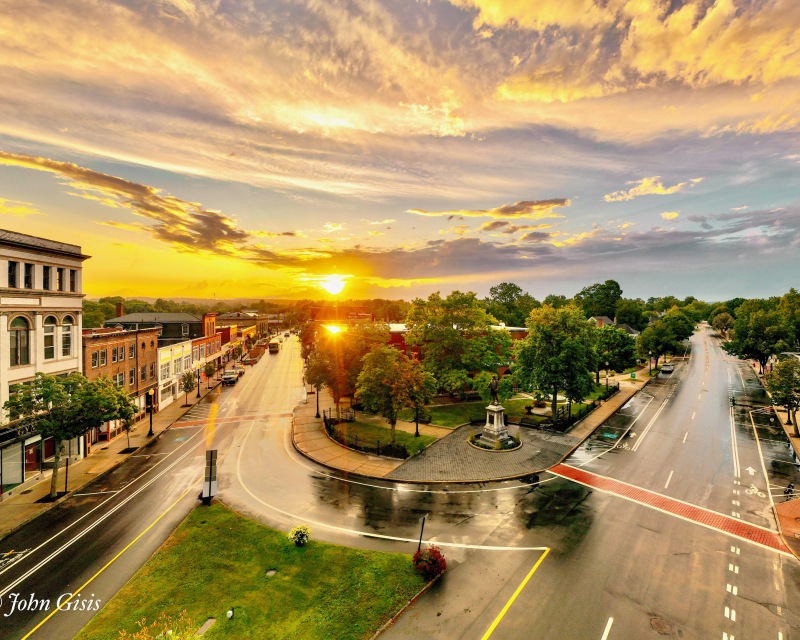 ROCHESTER - From breathtaking aerial views of the Nubble Lighthouse and Mount Washington to iconic Rochester images of Spaulding High's clock tower and the downtown, John Gisis and his drone have seen it all and shared it with the community, too.

It was only two years ago that Gisis, a lifelong Rochester resident and retired UPS driver, first got the drone photography bug.

"It was 2018 just before Christmas," he said on Tuesday during a demonstration of his drone at the Rochester Common. "I checked them out and was amazed at what it could do."

He said he purchased one at Best Buy for under $1,000 and was immediately impressed with how the pictures looked, how different everything looked from an aerial perspective.

He said his photos drew rave reviews on local Facebook pages, but within a month, he realized they weren't able to pick up the detail he wanted, especially in limited light.

So he went back and bought another one that had all the bells and whistles and a camera that had great zoom capability and worked well in limited lighting enabling him to get high resolution images at dawn or dusk.

Then there was no holding him back as he took photos of Rochester's downtown and surroundings popular with fans all over the Seacoast.

Gisis' photos now grace the pages of the Greater Rochester Chamber of Commerce website and others throughout the region.

He's donated many images to the City of Rochester and other groups including conservation nonprofits.

In the spring of 2019 he began exploring New Hampshire's and Maine's coasts and mountains.

Among the highlights was taking drone photos from the back side of the Nubble Light to see views most of the public has never seen.

The drone, itself, is a marvel of technology, he said. It warns him if he's exceeding the FAA ceiling of 400 feet, tells him when the 35-minute battery is getting low and automatically returns to "home" before it runs out.

All of the controls are by way of a couple of joysticks on a control box.

He said the drone can travel about 40 mph laterally and a little less than 10 mph up or down.

Gisis, who is licensed to operate drones by the FAA, said now that word's getting around, he actually gets some commercial jobs where he'll make a bit of money doing photo shoots for real estate firms or developers.

But any money he makes is already spoken for.

"This drone is two years old," he quipped. "The technology is getting kind of outdated. I've got my eye on another one."

To contact John or check out his pages go to