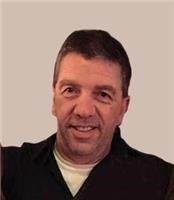 SOMERWORTH - Ricki A. Wentworth, 59, died unexpectedly on Monday, May 25, 2020. He was born July 23, 1960, the son of David and Jeannine (Normand) Wentworth.
He was a lifelong resident of Somersworth and graduated from Somersworth High School in 1978. He spent his career as an iron worker; starting his own company (Arc Force Welding), and working nearly 20 years at the Portsmouth Naval Shipyard.
Rick was a man with many passions and always put his family first. He enjoyed the 57 years he spent at Ossipee Lake Camping Area and was known to show off his horseshoe tournament trophies. He was a true New Englander who enjoyed boating, golfing, hunting, snowmobiling, riding his Harley, and socializing around the campfire. He especially loved showing off all his toys and "As Seen on TV" gadgets. He was confident that he would win any contest and welcomed a friendly but (very) competitive game of ping pong, darts, or a unicycle challenge. His sense of humor was as big as his heart and he brought joy and light to all he encountered.
Of all he accomplished in his life nothing made him more proud than his two daughters, Nicole and Ashley and most recently his granddaughter Reagan. He will be fondly remembered and missed beyond measure by all who knew him.
He is survived by his loving children, Nicole White and husband Adam of Glendale, Calif.; Ashley Canney and husband Kevin of Rochester; and was a proud new "Grampy" to his first granddaughter Reagan Canney. He is also survived by his mother Jeannine of North Berwick, Maine; brother Dennis and wife Sharon of Berwick, Maine; brother Scott Wentworth and wife Debbie of Somersworth; nephews Zackary, Jesse, Tanner, and Adam; niece Ashley; girlfriend Bonnie Finnigan; as well as countless friends who he treated like family.
He was predeceased by his father David "Wheezer" Wentworth.