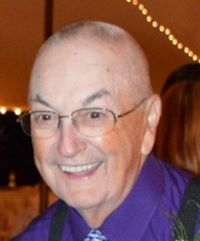 BARRINGTON - Robert (Bob) E. Brooks Jr., 84, of Barrington, died peacefully at his home on Wednesday, January 12, after a period of failing health. He was born in Rochester on Feb. 25, 1937, to Robert Brooks Sr. and Pauline (Henderson) Brooks.

A lifelong resident of Rochester and Barrington, Bob graduated from Spaulding High School and served four years in the US Air Force.

Bob retired from Jarvis Cutting Tools after a 30-year career with the company. In his retirement, he enjoyed following his grandchildren and great-grandchildren in their sports and school activities. He also enjoyed his many trips with family and friends to the casinos and area fairs to watch harness racing. One of his favorite pastimes was watching any and all sports on TV as well as the old westerns. A more avid fan of John Wayne cannot be found! Bob was a member of the Elks Lodge 1393. Bob would always be found sporting one of his baseball caps from his vast collection - including his Yankees cap, even though he was a Boston sports fan.

He enjoyed his daily trips to the McDonald's and Hannaford where he forged great friendships with store associates and other patrons. These trips were the highlight of his day, and he greatly appreciated the conversation and kindness.

Members of his family include his loving wife of 51 years, Joanne (Landeck), his son Jerry Brooks, and his daughter Debra Stanley and her husband, William; his grandchildren Eric and Clara Stanley, Beth and Andrew Raynor, Aaron Brooks and Wes Seavey, Adam and Marjorie Brooks, Alison and and Tim Newell, Adriana Brooks, Tyler and Mikenna Marcoux, Ryan and Sarah Stafford, and his bonus grandchildren Chris, Catie and Casey Couch.

He adored his nine great-grandchildren: Benjamin, AJ and Anna Stanley, Ayla and Kalea Raynor, Amaya and Xander Brooks, Leland and Lenora Newell. He also enjoyed the love and friendship of his brothers- and sisters-in-law, Vandy and David Hall, Diane and Doug Gagnon, Billy Landeck, and the late Bobby Landeck, as well as many nieces and nephews.