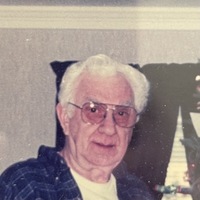 Bob was born and was a lifelong resident of Rochester, eldest son of Elmer and Gertrude Gerry. He graduated from Spaulding High in 1950, after which he enlisted in the Navy. He was a Korean War veteran serving on the aircraft carrier USS Bennington.

In June of 1953 he married his wife of 67 years, Joan Brownell, who died in September of 2020, Bob was also predeceased by his sister Betty (Gerry) Ellis.

After his service in the Navy he worked many years for General Electric in Somersworth.

In 1968 he became a franchised Sno-Jet snowmobile dealer from the garage at his home, after which he owned and operated several used car dealerships, body and paint shops until his retirement. After retiring he started Knuckleball Sports cards and collectibles from his garage at home. After retiring the second time, he enjoyed many years working at Mi-Te-Jo campground in Milton, NH.