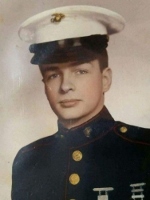 LEBANON - Robert Stanton Werner, 76, died on Thursday, December 28, 2016, at his home in Lebanon. He was born on July 18, 1940, in Boston to Henry and Eleanor (Graves) Werner.
He proudly served his country in the Marines, ending his stint in 1964.
Robert drove tractor trailer for 35 years, while raising a family in New Hampshire and Maine. After retiring in 2004 he then proudly served his community at the Sanford Food Pantry for over 15 years.
Survivors include a brother, Henry Werner of Merrimack, N.H., nine children, eight grandchildren, and one great grandchild.
Bob will be fondly remembered for being full of character, life, love and charity.