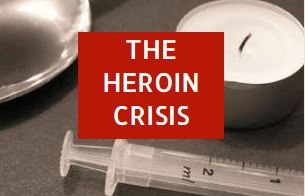 COPYRIGHT2017© ROCHESTER - Despite stepped up efforts to point heroin addicts toward local treatment centers and public awareness outreach on the increased overdose dangers from synthetic opioids like fentanyl and carfentanil, little dent has been made in the number of drug overdoses and drug overdose deaths here.

In fact, the numbers have gone up since city recovery centers opened last year.

Through May of this year there have been 56 overdoses reported by Rochester Police, compared to 49 last year, Rochester Police Capt. Jason Thomas said on Saturday, a 16 percent increase.

Overdose deaths has also increased in the same timeframe, from seven last year to nine this year, a 29 percent spike.

Just as disturbing, Thomas said the city's addicts know the new synthetic opioids' level of dangerousness is extreme, yet they continue to risk their lives daily by taking it.

Some lawmen have even told The Lebanon Voice that addicts often seek out the more powerful drugs due to their enhanced highs.

"The users in the city know the dangers, they see their associates dying," Thomas said.

At least two recovery centers have opened in the city: the Rochester Community Recovery Center behind Rochester District Court and SOS Recovery Community Center inside the First Church Congregational on South Main Street.

The death grip drugs have on Rochester remained painfully clear on Thursday as Rochester Police responded to two "welfare check" calls for people reported passed out and slumped over in their cars, with heroin use suspected in each incident.

The first one occurred a little before 2 p.m. when a pair was reported passed out inside a car with the motor running in a parking lot at The Ridge Marketplace.

A woman inside the car, 22-year-old Kimberly Anne Demers of Milton Mills, was arrested on a charge of possession of drugs thought to be heroin, Thomas said. The car was seized for evidence and a man who was in the car with her may also be arrested, he added.

Less than three hours later, a Maine woman was arrested outside the Maple Street School after police responded to another welfare check in which a female was reported slumped over the wheel, unconscious and wearing nothing but a bra.

Angelica Brown, 21, of Madison, was arrested for DWI, driving after suspension and drug possession.