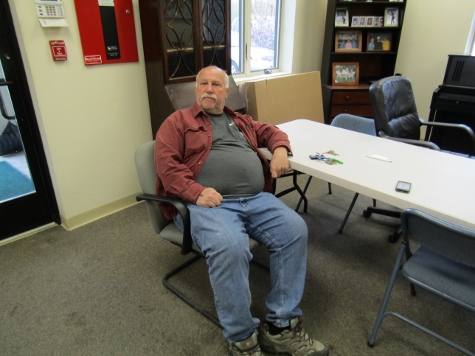 Norm Vetter, where he spoke to reporters today regarding the fate of the Rochester Fair (The Lebanon Voice photo)

COPYRIGHT2017© ROCHESTER - Under crushing debt amid years of running in the red, the Rochester Fair's board of directors on Thursday decided to pull the plug on this September's fair, ending a tradition in the city that has lasted more than 140 years.

Norm Vetter, board chairman of the Rochester Agricultural and Mechanical Association, which oversees the fair, painted a dire picture of the fair's finances, pointing to almost $800,000 that they were in debt, with the fair in recent years hemorrhaging between $60,000 and $75,000 annually.

Vetter said between now and next year board members will assess the viability of the fair and what avenue it should take.

"We'll close in our ranks and look at some different scenarios to revamp," said Vetter, adding he had no specifics in mind as to what any future fair might look like.

"We do have hopes at some time to put some type of plan together," he said.

Vetter, who has been chairman of the board for two years, said canceling the fair this year had been a tough decision.

"It's very difficult," he said. "My wife grew up in town. None of us wanted to make this decision."

Vetter added that the impetus to close the fair was purely financial.

"We would have owed even more money if we had had another fair this year," he said.
Vetter said an underlying reason for the fair's recent financial failings was attendance, which he said had been dramatically down the last five to eight years.

"People aren't spending money at the fair like they used to," he said.

He further stated he didn't think the loss of horse racing about 12 years ago was to blame for the fair demise.

Meanwhile, Mark Perry, general manager of the fair said today he would have hoped they could have built efficiencies on the back end of the operation to keep the fair going.

He also said the entire staff at the fair had offered to give up their 2017 salary in an effort to save it.