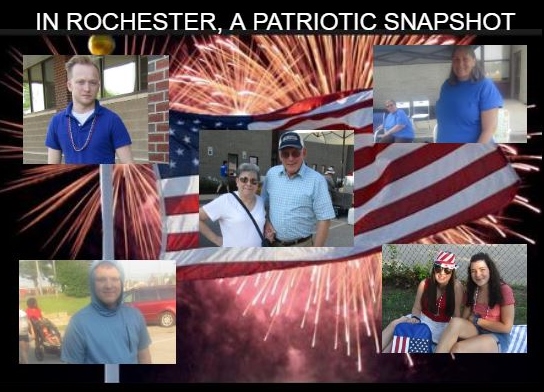 ROCHESTER - Despite a recent poll showing patriotism in American to be at an all-time low, a random sampling of revelers at Rochester's 2nd Annual Fireworks Festival on Wednesday proved what we already knew: Polls are often an inaccurate reflection of reality on the ground, which is where we went to ask people what they thought.

More than 2,000 walked through the turnstiles to browse the score of vendors arrayed in front of the community center and spread blankets on the athletic fields of Spaulding High for fireworks viewing once darkness descended.

Among them were John and Donna Mahoney of Waterboro, Maine, who said they come to Rochester all the time to shop, dine and attend many events at the Rochester Opera House.

When asked about the recent poll, John was quick to point out an alternative opinion.

"It depends on who you ask or who you listen to," he quipped. "Most in the media paint a poor picture, but if you've been around long enough you know we're doing pretty good. President Trump's done a lot; they just have to leave him alone."

When asked why he felt so patriotic, he answered with one word: "Freedom."

Morgan Arroyo and Nicole Polychronis, who will both be juniors at Spaulding in September, agreed they were both very patriotic, and felt the Fourth of July was a day all Americans should be able to come together and express their love for the U.S. of A.

"I feel very patriotic; a lot of people have so much pride in the country and today should be a day we all come together and be proud," she said

Polychronis agreed, adding "This is a day to celebrate the country."

In the Gallup poll recently released much of the negativity was spawned by Democrats, of whom only 22 percent said they were "extremely proud," of their country, but Laura Hainey of Rochester Democrats was showing some love on Wednesday.

"I feel very patriotic," Hainey said, adding. "And we have hope because we have 23 good people running for president."

State Rep. Joe Pitre, R-Strafford 2, disagreed with Hainey about who should be in the White House come January 2021, but did agree with her that he felt very patriotic this Fourth of July.

From young to old the overwhelming majority were in agreement.

"I love everything about this country," said Ian Hamel, 13, of Rochester. And Rochester resident Dave Bennett who was attending the event with his family, said simply, "What's not to like?"

Meanwhile, a contingent of service wives and their friends all agreed the United States is No. 1.

"Yes, of course I feel patriotic today," said Emily Bruggeman of Rochester. "Our freedom is worth fighting for and I'm grateful we have a military willing to sacrifice to keep us free."

"It's all about the freedoms we have," agreed Adeline P. of Rochester whose husband is in the Air Force.

Julie H. of Rochester said she'd been abroad when her husband was deployed with the Air Force.

"I've lived overseas and this is better," she said. "We have freedom of religion, and the right to bear arms. And if I want a gun to protect my family I can have one."

Only one of the dozen we talked to, UNH student Patrick Farrell of Wilton, expressed a profound unease with the country's track, resulting mostly from the war in Iraq that began in 2003.

"I was born in '96 and for years I grew up thinking we went to war with Iraq because of 9/11," he said. "Then I found out they had nothing to do with it. I don't feel good about the country."