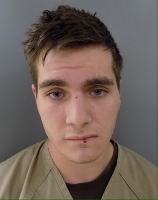 ROCHESTER - A Rochester man will spend three to six years in state prison after pleading guilty today to gun and assault charges against a former girlfriend.

Rochester Police became involved in the case after the victim reported a Feb. 6, 2018, attack at Bartlett's residence.

Once the investigation concluded, warrants were obtained for his arrest and police took him into custody at his residence.

The victim suffered injuries to her eyes, arm and neck during the attack.