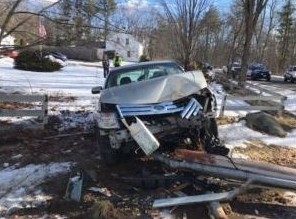 ROCHESTER - A Rochester man was injured today when his car lost control and hit a utility pole off Whitehouse Road.

The crash occurred around 10:40 a.m. when a 2009 Ford Taurus driven by Austin Silver, 23, was headed west on Whitehouse Road, veered off the road and struck the utility pole.

Silver sustained non-life threatening injuries and was transported to Frisbie Memorial Hospital to be treated.

Both the vehicle and the pole were heavily damaged.

The accident scene was shut down while emergency personnel extricated the driver and utility crews tended to the damaged pole and downed wires.

The cause of the accident is still under investigation, however neither speed nor impairment appear to be a factors.