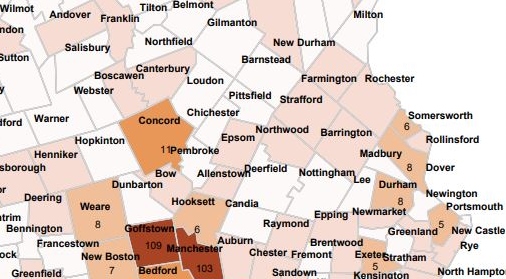 Active cases as reported by state DHHS on Sunday.

Two new hospitalized cases were identified for a current total of 20, down seven from Saturday. No new deaths were reported.

Another hopeful trend includes the numbers of individuals being monitored for the virus, which had been hovering near 3,500 for several weeks, but slipped to 3,300 on Sunday.

Meanwhile, Rochester, whose numbers had been skewed due to faulty reporting by state DHHS for about seven weeks, now show 1-4 cases in the city. Other local numbers put Dover at eight, Somersworth at six, Farmington, Barrington and Strafford at 1-4 and Milton with none.

Persons Being Monitored in NH (approximate point in time) 3,300