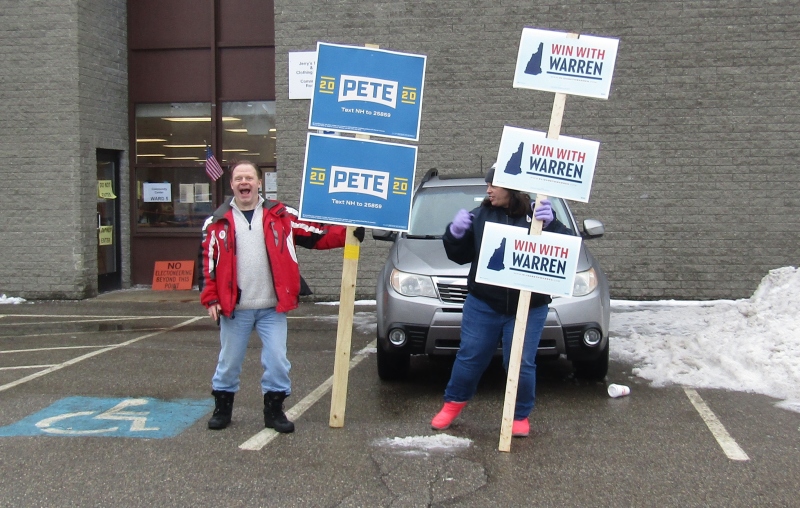 Michael Gallipo, left, and Ren Gallo have some fun during a long day of sign holding at the Ward 5 polling center at the Community Center. (Rochester Voice photo)

ROCHESTER - Unabashed 78-year-old socialist Bernie Sanders won his second contest in a week and his second straight New Hampshire primary on Tuesday, edging out rising star Mayor Pete Buttigieg by 4,000 in the most recent data.

The results, reported early this morning by the Union Leader with 91 percent of precincts reporting, showed billionaire Tom Steyer and Hawaii Congresswoman Tulsi Gabbard with three percent and freedom-dividend candidate and businessman Andrew Yang at 2 percent.

Yang suspended his campaign late Tuesday night, while Biden left for firewall South Carolina before the votes were counted.

Meanwhile, 128,000 Republican ballots were expected to be cast, with President Trump expected to get the overwhelming majority, despite a last-minute flurry of events by former Massachusetts Gov. Bill Weld.

Michael Gallipo of Rochester, who was holding a "Mayor Pete" sign at Ward 5 polling at the Community Center Tuesday afternoon, said he'd be happy with either a first or second for his Buttigieg.

"I love the access here, I've seen seven of the candidates so far," added Gallo, who said she supported Elizabeth Warren because her plans were the most comprehensive.

Chris Rice, a Ward 5 Rochester City Councilman and a "Mayor Pete" supporter, said the New Hampshire Primary, unlike last week's caucus debacle in Iowa, proved once again that the first in the nation primary is alive and well in the Granite State.

"If they tried to take this away from us, there'd be a revolution," he said.

For a complete rundown on the city vote click here.