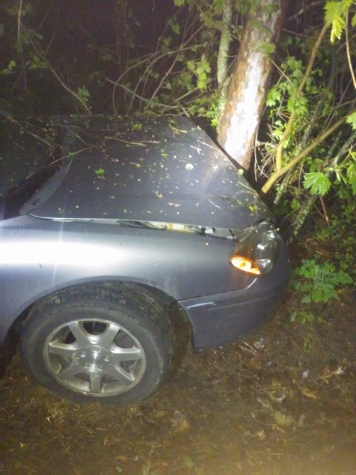 The front end of teh Taurus saw heavy damage upon striking a tree. (Rochester Police photo)

ROCHESTER - A Rochester teenager was arrested for conduct after an accident early today after the vehicle police say he was driving crashed into woods off Schley Street.

Officers were called to the accident scene around 1:20 a.m. after hearing a report of a single car into the woods.

When they arrived to the area of 4 Schley St. they found that a 2006 Ford Taurus being driven by Michael Remington, 18, was traveling east when it went the road striking a tree.

Remington fled the scene and was located by officers while he was walking on North Main Street. The other occupants from the vehicle were located and did not suffer any injuries.

There was significant damage to the Ford, with airbag deployment and the vehicle had to be towed.

Remington was evaluated or minor injuries and refused transport to the hospital. He was arrested on scene for conduct after an accident and released on personal recognizance pending a June arraignment.