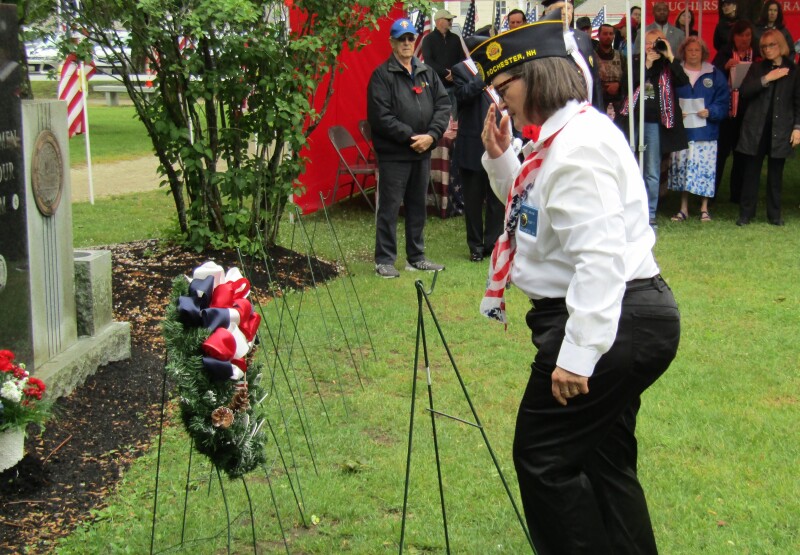 SFC Rose Askins of Rochester salutes after laying a wreath to commemorate the sacrifice of Army personnel who died in service to their country. (Rochester Voice photos)

ROCHESTER - Amid a backdrop of 500 flags and a maskless crowd that included two from New Hampshire's Washington delegation, close to 300 turned out on Monday to honor America's servicemen and women who made the ultimate sacrifice in defense of our country.

Rochester Veterans Council President Dennis Sellers led a somber wreath-laying ceremony for the five armed services and POW/MIAs followed by a three-volley gun salute in tribute to the country's war dead by an Honor Guard.

Bagpiper Pat Boyle then played a stirring Military Set playing the anthems of the Army, Navy, Air Force and Marines and an emotional rendition of "Amazing Grace."

This Memorial Day was extra special, not only because it was the first large gathering in Rochester since the COVID-19 pandemic began 15 months ago, but because of the Vouchers for Veterans program, whose fund-raiser brought more than 500 flags to adorn the Common in a breath-taking swath of patriotic splendor.

U.S. Sen. Maggie Hassan continued the patriotic theme as she exhorted the crowd to put aside political and cultural division and unite as a nation.

"The soldiers who fight for us come from different cultures and politics," Hassan said, "but they fight for us without the thought of politics, only our country."

The flag fund-raiser - titled the "Field of Honor" - allowed anyone to purchase a flag that would be adorned with a name tag of a loved one who served. The flags are expected to be taken down this week and sent to those who participated in the benefit.

The 11 a.m. ceremony, which began amid thick clouds, ended around noon with a brightening sky.