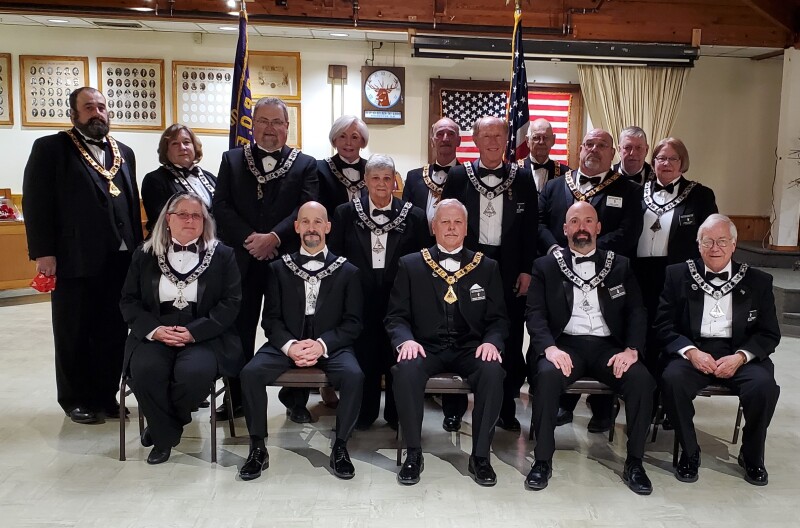 There were about 50 people in attendance, including family members of Officers being installed. Traditional gifts were presented to PER Bonnie Skidds from the Lodge, PER Association and from Jerry and Cindy Skidds. Incoming Exalted Ruler Jerry Skidds presented his wife Cindy with a bouquet of flowers. Everyone enjoyed a delicious roast pork dinner and ice cream dessert at the conclusion of the ceremony.

With Covid-19 restrictions, this has been an extremely challenging Lodge year just ended, but our new Exalted Ruler Jerry and his Officers are up to the challenge and will continue to move forward to ensure our programs are successful, a press released noted. Exalted Ruler Jerry Skidds also thanked his sister Bonnie for her leadership as the Exalted Ruler for the past year and noted she did a great job with many challenges to deal with.

The Elks Lodge has over 900 members and growing. They are involved in programs that involve youth activities, veterans, student scholarships, drug awareness education, community involvement, charitable giving and many other miscellaneous endeavors. In addition, the Lodge has recently undergone some significant facility renovations and improvements, which will enhance its vibrant social activities for the membership.

Recognition and thanks were extended to the Lodge Officers and Members who were part of the Home Committee and the Entertainment Committee.

The top awards presented were given to the following members:

Elk of the Year was presented to Member Deanna Souza by Exalted Ruler Bonnie Skidds.

Officer of the Year was presented to Lodge Treasurer Cindy Skidds by Past Exalted Ruler Jim Clark.

Each of these individuals performed at a very high level during the past lodge year and these achievement awards exemplified their commitment, dedication and hard work in regards to our Order. Congratulations to all award recipients, the lodge said in a recent press release.