Rochester's Tanguay flies like an Eagle through American Idol audition round 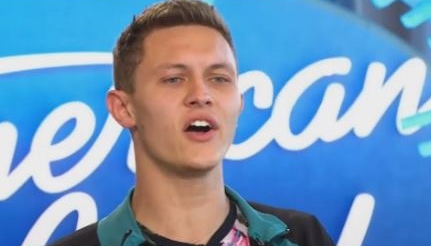 Kyle Tanguay of Rochester at his audtion round in Washington last on Sunday. (ABC 'American Idol' screenshot)

WASHINGTON - Rochester's Kyle Tanguay may have been singing "Mercy," but he didn't show any last weekend, tearing up the Shawn Mendes megahit and winning the golden ticket to Hollywood to compete in this season's American Idol on ABC.

Tanguay, who grew up in Rochester and attended and cheered at Spaulding High, walked into the audition room flanked by members of the Philadelphia Eagles cheerleading squad, which he joined last year as the first male performer in more than three decades.

"Idol" Judges Lionel Richie, Katy Perry and Luke Bryan voted unanimously to send Tanguay through to the Hollywood competition after Tanguay's so-smooth and sexy rendition of the pop tune.

Tanguay, 21, admitted during the Sunday airing of the audition that he had neither sung publicly nor professionally in his life, prompting Richie to comment, "I know I went from the shower (to singing professionally). Some people just have that shower touch."

"If you can grow fast, really fast, you're gonna do really well," Bryan added.