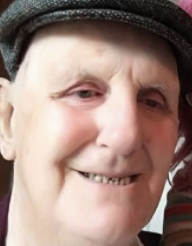 A spirited child, Roger attended Holy Rosary grammar and high schools. Upon his graduation in 1952 he proudly joined the Navy to serve the country he loved so much.

October 29, 1955, he married the love his life Janet A. Lamontagne. They were blessed to have had 61 years together. In 1956, at the urging of his wife Roger entered the Air Force. After 21 years of adventure and service Roger retired and returned to Rochester in 1973.

Roger worked several jobs including at GE, Frisbie Memorial Hospital, and Mass Gas & Electric. His favorite job was with Harry Marcotte at Marcotte Trophy & Awards. Roger & Harry formed a brother like relationship which lasted the rest of their lives. He enjoyed going to breakfast with Harry, Sal, Al, Rick, Richard and his daughter Julie. Roger volunteered his time at many veterans activities and proudly served on the Rochester Veterans Council. Also was a past member of the Rochester Historical Society. In his later years Rogers took care of his wife until her death in 2016.

Roger loved watching (listening really due to his vision with play by play description by Julie) to the New England Patriots and Boston Bruins.

Roger was a friend to many. Going grocery shopping with him was sometimes a long process as he greeted and was greeted by many people.

One of his favorite things to do was to host the Fourth of July fireworks family celebration on the front lawn. He loved having family around.

On August 20, 2022 he achieved his goal...to live to see 89 years. He celebrated at home with family including a special great-great niece, Anna-Banana. He had a special connection with Anna and looked forward to her visits.

During the last few years of his life Roger was blessed to have two caregivers, Loree Ackerman and Nancy Parry coming in to help him with his daily routines and provide him with companionship. Jay and Julie are eternally grateful for their love and assistance.

He was predeceased by his wife Janet (Lamontagne) Tremblay, his brother Ronald Tremblay and his honorary brother Harry Marcotte.