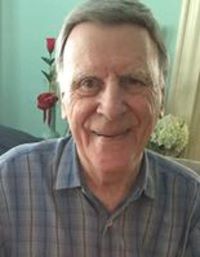 ROCHESTER - Roland T. Huppe, 94, died peacefully of natural causes on September 23, 2021, at his home surrounded by his loving family.

Roland was born in Laconia on March 6, 1927, the son of Gideon and Amelia (Gagne) Huppe.

He spent his early years in Lowell, Mass., and has lived most of his life in Rochester. He was a communicant of Holy Rosary Church and attended Rochester schools. A veteran of World War II, Roland was honorably discharged from the US Navy in 1946 having served in the Asiatic Pacific. He was awarded the World War II Victory Medal, the Asiatic Pacific Theatre Medal, the Philippine Liberation Medal, and American Area Ribbon. He was employed at General Electric Co. in Somersworth, NH for 35 years, retiring in 1988. He enjoyed a long and happy retirement. While at GE, he received certificates in electronics from Portsmouth Technical Institute. He was an avid sports fan, and found great joy in his family, especially his great grandchildren in his later years.

He was predeceased by his wife of 66 years, Norma (Masse) Huppe in 2014, and two brothers Armand and Marcel Huppe.