Sadness, solemnity and pride all on display at Rochester Common this Veterans Day 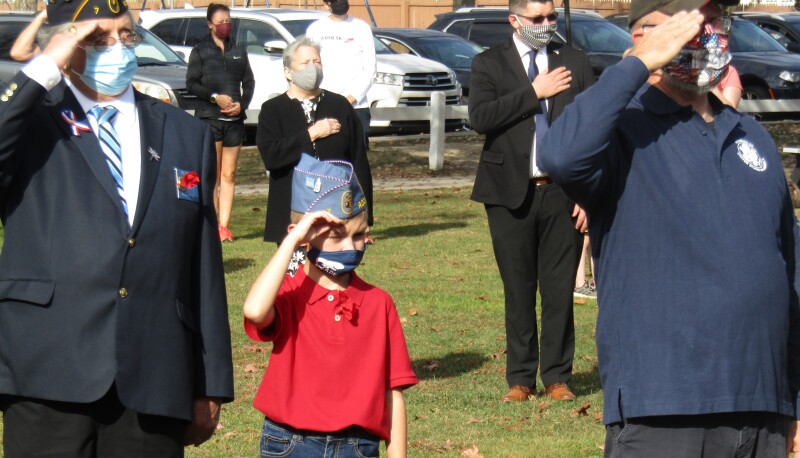 From left, Bob Johnson of the Air Force, his grandson, Zade Barstow; and Marine Clarence Wyatt Jr. salute as the flag is lowered to half staff during Wednesday's Veterans Day observance on the Rochester Common. (Rochester Voice photos)

ROCHESTER - The ongoing pandemic kept the crowds and Spaulding ROTC cadets away, but about 40 Rochester residents still showed up on Wednesday to celebrate Veterans Day on the Rochester Common.

An added tinge of sadness was in the air as Gordon Oliver, the longtime organizer of Memorial Day and Veterans Day events, died unexpectedly in October.

Oliver, the longtime chaplain of the Rochester Veterans Council, died on Oct. 5 following a stroke.

Taking over the duties for Oliver was Mark Hudson, the Amer Legion Post 7 historian, who read a proclamation from President Trump honoring our servicemen and women.

Hudson reminded the crowd that freedom is not free and that during the course of our country's history almost a million souls have been lost fighting for our country. Another million and a half have been injured, he added.

From Afghanistan to Iraq and all over the world American men and women put their lives on the line every day so that we may enjoys the fruits of liberty and freedom, he said.

After Hudson's address, the five branches of the military and American POW/MIAs were recognized as six wreaths were laid at the Soldiers Monument.

Laying the wreaths were Michael Seavey representing the Army, John Ward for the Navy, Clarence Wyatt Jr for the Marines, Bob Johnson for the Air Force, Andrea Boyle for the Coast Guard and Bob Talbot for POW/MIAs.

The ceremony concluded with the playing of Taps

Also on hand were the AMVETS Post 1, The Veterans Council and The Rochester American Legion.

Rochester Schools have been on remote learning since last week due to several COVID cases being identified recently, which led to the decision not to have them participate.