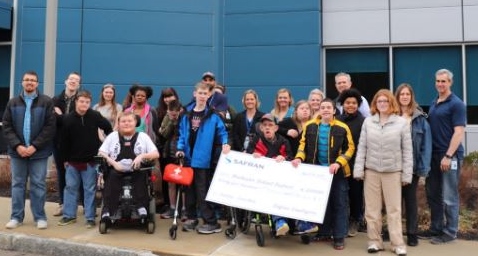 Safran presented the Rochester Schools with a $2,500 check as a result of students' work reconditioning dremel bits and cutting sandpaper for the company. (Courtesy photo)

ROCHESTER - Following months of hard work constructing parts for SAFRAN, a group of Spaulding High School students recently visited the company's local manufacturing plant to see the impact of their efforts.
Earlier this month a group of 13 students in Spaulding's special education program were treated to a tour of SAFRAN's Rochester location. Along with their teachers, the group also collected a check for $2,500 to further support the ongoing collaboration between the Rochester Schools and the aerospace manufacturer.
Since the middle of 2018, the students have been contributing to SAFRAN's work building engine parts and other supplies that combine to make the world's most prolific aircraft, including those made by Boeing and Airbus.
"We're trying to make the community a smaller place for these students, and we're really fortunate to have these kinds of relationships in town," said Spaulding Goal Oriented Student Transition teacher Kevin Boyle. "This visit let kids see how they're contributing."
Over the course of the last seven months, Spaulding students have been reconditioning dremel bits and cutting sandpaper to SAFRAN's specifications. The sandpaper is installed into SAFRAN sanding tools that ultimately touch every product the company makes in Rochester.
"The schools have worked really hard to make this happen, and this is great for these kids," HR Manager Sean Hoeing said. "Some of the outcomes, which I think are important, are that they have a tangible skill and they're making a meaningful contribution."
During the visit, SAFRAN employees shared their insight on how jet engines - like the ones they've helped build - work. They also shared the news that the work done will assist SAFRAN in making one of the largest commercial jet engines in the history of aviation.
Last Friday's visit was part of a larger collaborative effort among area school districts, including Rochester, and SAFRAN. In addition to the partnership with the GOST program, SAFRAN offers job training through Great Bay Community College, and also works with the technical centers at local high schools.
Several Spaulding High School graduates who embody the success of that program were on hand to greet the students when they arrived.
Since the inception of the SAFRAN-Spaulding partnership, students in the Goal Oriented and and Learning Independence Through Experience programs have reconditioned more than 4,500 dremel bits and cut more than 1,000 pieces of sandpaper. Students have also begun to expand their responsibilities, including taking on the challenges associated with quality control and managing inventory, billing and receiving.
"Our goal is to support workforce development for the whole community," Hoeing said. "There's always a job for somebody, they just have to have the skills to do it."