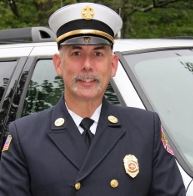 LEBANON - Despite his promise to quit his full-time Rochester firefighter position if his budget were approved in June, Lebanon Fire and Rescue Chief Dan Meehan continues to work both jobs, and Lebanon selectmen said on Monday they're good with that.

In September during a regularly scheduled selectmen's meeting The Lebanon Voice asked selectmen why Meehan hadn't quit his full-time Rochester firefighter position as he had promised to do at a May meeting.
"I don't know, we'll be asking him," Selectmen Chair Christine Torno replied, noting that Meehan was schedule to meet with selectmen later that day.
The Lebanon Voice then asked if that meeting would be in public session, to which Torno replied yes, however, minutes of that Sept. 26 meeting reveal there was no mention of Meehan's retirement.

On Monday, Torno stated that Meehan had asked selectmen to go into executive session, and that his explanation as to why he had not retired yet was amenable to the board.

"We made a decision that we were acceptive of his reasoning not to retire at this time," Torno said on Monday, adding that there was no timeframe as to when Meehan's status as a full-time Rochester firefighter might change.

"He (Meehan) did not give us that yet," Torno said. "If he wants to talk about that (in the future) we'll have an executive session to decide where that's going."

Meehan's reluctance to quit his Rochester job is at odds with his sentiment expressed in May when he pressed selectmen to accept his full-time $49,000 annual salary so he could be there for Lebanon 24/7, covering shifts if per diem personnel were unavailable and on hand to command firefighters and rescue personnel hands-on in emergency situations.

In October Selectman Royce Heath's stance on the moonlighting Meehan appeared similarly blasé when asked when Meehan would limit his duties to Lebanon as he had pledged. "I don't know and it doesn't matter," Heath said at the time.

Meehan, meanwhile, continues to collect two full-time salaries, from Rochester, where he works as a regular full-time firefighter; and from Lebanon where he is the full-time Fire and EMS chief.
In a May 19 Board of Selectmen meeting minutes, it states, "(Meehan) said if he is full time (in Lebanon), he will be dedicated to Lebanon and not work anywhere else." He also told selectmen during that meeting that as a full-time chief working for Lebanon 24/7 he would be available to work day or night shifts when needed in case other personnel called in sick.
Meehan currently gets $913 a week from Lebanon and about $1,154 a week from Rochester for his full-time pay in both towns. It should be noted that for five months now Meehan is also collecting both towns' employee benefits packages as well.
In September, Rochester Fire Chief Norm Sanborn noted that if Meehan were working one of his nine or 10 24-hour shifts a month in Rochester, he couldn't just up and leave if an emergency occurred in Lebanon. Sanborn said that before leaving he would have to arrange for a replacement to cover his shift and that if he couldn't find one, he wouldn't be able to leave.
Meehan told selectmen in May that it can take several months to retire from Rochester, a notion that has been refuted by Marty Konlon, spokesperson for the New Hampshire Retirement Board, who stated it only takes 30 days.
In fact, Konlon said that Meehan could have filled out retirement paperwork as early as April 1 to enable him to begin his retirement pension with Rochester on July 1, adding that if the June Lebanon vote had rejected the full-time Lebanon chief's job, Meehan could have simply pulled back the paperwork on June 30.
Konlon said recently that Meehan hadn't resigned as of Nov. 1, meaning that the next window to retire isn't till the first of December.

The ongoing saga of when Meehan will stop his double dipping is not only raising eyebrows in Lebanon, but among public service employees around the northern Seacoast.

"How long are they gonna let him get away with that?" mused one Strafford County court officer recently.