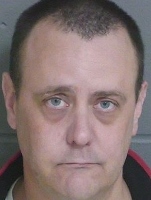 CONCORD - This week's "Fugitive of the Week," Edward Coleman III, 44, was arrested by the Dover Police Department on Wednesday night.

Coleman was just featured on Wednesday as the "Fugitive of the Week," which was reported in The Rochester Voice and many other online and print publications.

Shortly after Coleman was featured as the "Fugitive of the Week," numerous tips were received, resulting in his apprehension at an apartment complex located on Old Madbury Lane in Dover.

When officers arrived, Coleman initially refused to open the door to the apartment, but after a short period of time the officers were able to enter the apartment where they arrested Coleman without further incident.

Coleman was transported to the Strafford County Jail for processing and holding pending his initial court appearance on the outstanding Dover warrants today.

After the Dover charges are resolved, Coleman will be returned to the New Hampshire State Prison for Men on his parole violation.