Shame on you, Sen. Hassan, for using WWII veterans for campaign ads. 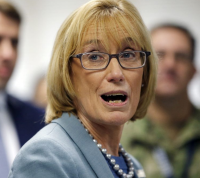 To the editor:
Senator Hassan, your re-election promotional videos are appalling, and need to be removed from the airwaves.
You included file footage from two wars that included soldiers trudging through snow, as well as trailing behind a tank.
Two separate wars, two commercials.
You chose to praise your father's involvement in World War II. You said, your father came back wondering if our country was worthy of what was seen on the battlefield.
This may seem commendable to you, but not me.
The moment I hear your sanctimonious words my blood boils and my stomach turns.
I hear your words, while I picture our military men and women, carrying wounded or lifting Afghan babies from their mothers arms to safety, in hopes of a better life.
Subsequently, this same Marine, who lifted the baby, is reported to be under investigation, after attending a President Trump rally.
How demoralizing this must be to our service members, and their families.
Here's why.
When President Biden, and his "League of Minions" surrendered to the demands and conditions set by the Taliban, even up to the minute. How disgraceful. Yet, within hours, the "Purge" of Military Personnel began again, by the very "Solons" that mismanaged this debacle and assisted in the extermination of 13 American Service Members outside the Kabul airport. I haven't seen any mention of those who are likely wounded for life, in the media.
The soldiers your administration decided to seek out and destroy, have been considered "White Supremacists," or worse, for just being a Conservative. What a travesty.
I cannot stand watching our loyal service members being treated like trash.
You should be ashamed of using World War II veterans for your promotional ads.
Shameful!
- Lou Archambault,
Ret. USAF
Rochester
Read more from:
opinion
Tags:
None
Share:

Members Opinions:
davenh55
[Delete]
Hassan is a Democrat puppet as all the rest of the Democrat's. To take a position to pass any bill that will place hardship on American families. To not talk about allowing millions of Illegal immigrants into our country, To allow immigrants to come through with no testing for disease and not administrating vaccines to them. And to not give a voice against Biden with his mandate to fire employees who have not been Vaccinated. Hassan you are a Disgrace to NH.