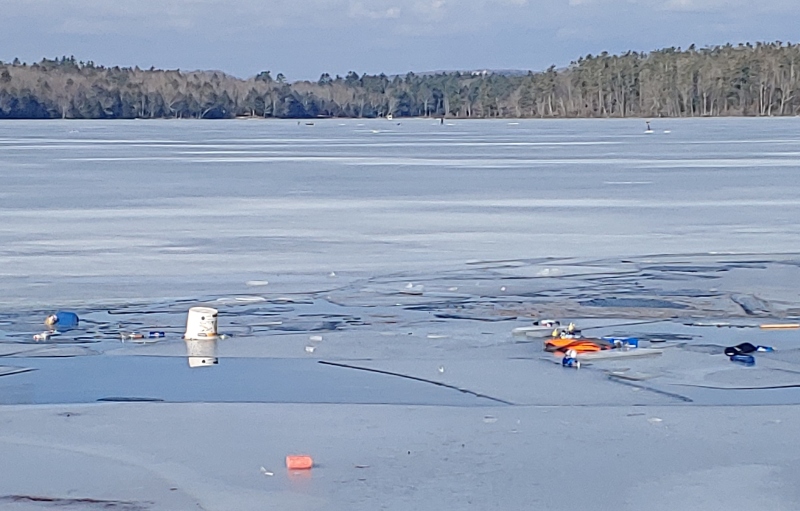 WARREN, Maine - A rescue by a Knox County Sherriff's Office Sergeant likely saved the life of a Warren man after the ATV he was a passenger in drove into open water while on the ice on Crawford Pond Saturday night around 9:30.

Craig Dennison, 38, of Warren, was operating his 2015 John Deere Gator 4x6 ATV with Donald Holbrook, 28, of Warren as his passenger when the ATV drove into an area of open water about 100 yards from shore on Crawford Pond in Warren.

Residents on the shore heard the cries for help and contacted 911. Two Knox County Sherriff officers responded, as well as a member of the State Police and the Maine Warden Service.

Dennison was able to get himself out of the water and onto the ice. Knox County Sherriff's Office Sgt. Arthur Smith utilized his throw rope and fastened one end to the shore and the other end to himself, jumped into the water, and held a struggling Holbrook upright in the water so he wouldn't drown until they could be rescued and pulled out of the pond.

Both Dennison and Holbrook were transferred to Pen Bay Hospital in Rockland, where as of last night, Dennison was in stable condition, while Holbrook was listed as stable but serious. He was transferred to Maine Medical Center in Portland.

"Ice conditions along the coast are hazardous in some areas. With the warmer weather, some areas that are normally frozen this time of year may not be. Please be sure to check the thickness of the ice before heading out," said Sergeant Aaron Cross of the Maine Warden Service.

The Maine Warden Service is investigating the accident, and it remains under investigation. No other information is available at this time.