Showdown at the Fairground: Twisted metal extravaganza set for next Saturday 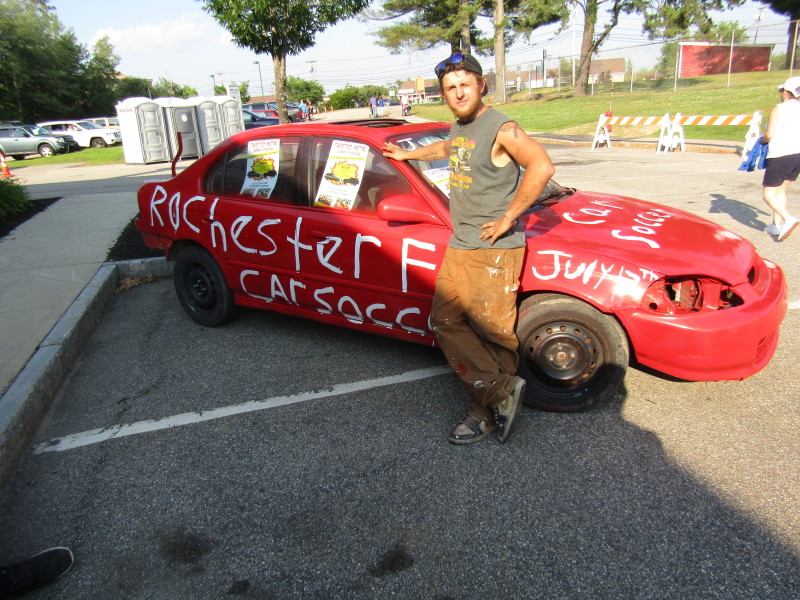 Eddie Davis of Berwick, Maine with his '98 Civic you can rent and drive in the demolition derby. (Rochester Voice photo)

ROCHESTER - If you like to play soccer and beating on cars, then you will be in a happy place a week from today when the Rochester Fairgrounds hosts the Twisted Metal Summer Showdown featuring Enduro racing, a demolition derby and yes, soccer with cars.

To drum up some publicity for the event Eddie Davis of Berwick, Maine, had his slightly beat up '98 Civic on display during Rochester's Fireworks Festival on Thursday.

According to Davis, if you want to see some real fireworks, don't miss this twisted metal extravaganza, which bills itself as "an afternoon of motorized thrills and excitement."

And if playing soccer with cars is on your bucket list, you can pay 15 bucks and they'll let you be a passenger.

"We've been practicing quite a bit," Davis said. "And we already have the four teams that will play for the championship.

"The goalies are excavators," he added.

There will also be an endure race where speeds around the Fairgrounds track could get as high as 60-70 mph and a demotion derby for four- and six-cylinder cars. No trucks.

In an enduro race, drivers often "tap" one another while jockeying for position, while in a demo derby, the object is to "take out" the other vehicles, Davis said.

For those who want to be in the demolition derby or the endure race but don't want to risk their own wheels, they can pay $100 to race a car like Davis'.

To do that they would have to sign a waiver and pay the $100 for the car plus entrance fee for the event.

Food and beverage including beer concessions will also be available when things get under way at 2 p.m. General admission is $10.

The event is a fund-raiser for the Rochester Fair, which this year will run from Sept. 12-22.