Smith is the one who'll beat Maggie Hasn't in November 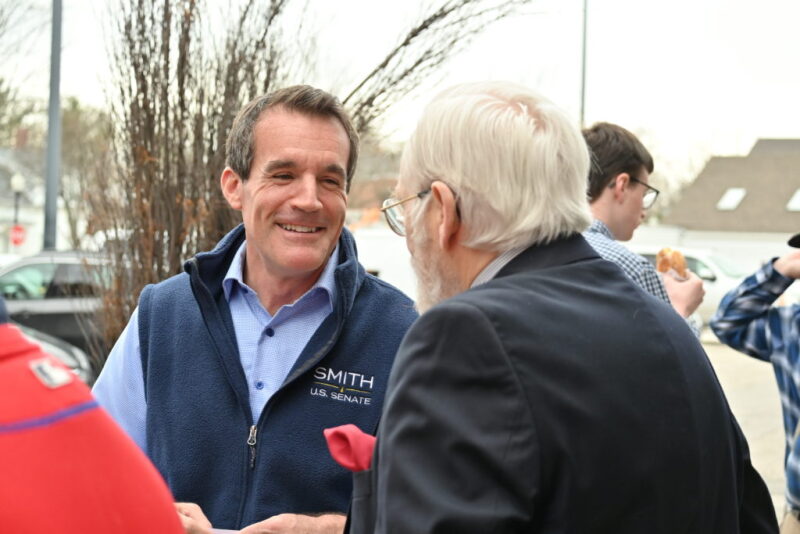 Kevin Smith on the stump in New Hampshire during his primary campaign. (Courtesy photo)

Kevin Smith is a no-holds-barred conservative fighter who will shred U.S. Sen. Maggie Hassan on the debate stage this fall.
His no-nonsense approach to fixing this country's southern border, his pro-life commitment and fiscal policies he put in place as Town Manager in Londonderry all showcase his wide skill set.
Then look at his leadership rolls in quasi-governmental entities as chairman of the Pease Development Authority overseeing Manchester and Portsmouth airports as well as the Port of Portsmouth and Pease Tradeport.
His ability to navigate these leadership positions while toeing a strong conservative line on taxes, border security and the economy will serve Granite Staters well inside the Beltway.
During his nine-year stint as town manager in Londonderry he returned $11 million in property tax relief, something Rochester residents would also dearly love by the way.
When Biden boasted that Big Oil had thousands of leases to drill oil, he blasted the president for being "disingenuous."
"It can take years to find and identify oil or gas on those leases," Smith told The Voice earlier this year. "He should open the Keystone pipeline immediately and suspend all the earlier restrictions he placed on energy producers in his first weeks of office."
Smith has also called for the immediate removal of Alejandro Mayorkas as the head of homeland security for his scurrilous handling of the southern border crisis.
Smith also wants to designate the drug and human trafficking cartels as Foreign Terrorist Organizations and to immediately dispatch National Guard troops to the border until the wall President Trump fought for is completed.
And when Biden appeared in Portsmouth in April trying to take credit for the Portsmouth Harbor turning basin project, Smith blasted Biden again, calling it "political fraud."
."President Trump is the one who stripped away red tape and government inefficiency and revived this longtime-planned project, not Joe Biden," Smith said on April 19, the day of Biden's visit. "As the former PDA Chair who oversaw the Portsmouth Harbor during this project's time, I know who deserves what credit, and Joe Biden's visit today is nothing short of political fraud."
So Smith is a fighter, quick to react to blatant lies and ready to fight for his values, our values.
When he kicked off his campaign, he called Hassan a U.S. senator who has little time for Granite Staters.
"Maggie Hassan has been an absent senator, more comfortable holed up in Washington," he noted during a January speech. "We rarely see her in the Granite State. So I have come to view her not so much as Maggie Hassan ... but as Maggie "Hasn't."
And she Hasn't a chance against Kevin Smith in November.

For all these reasons The Rochester Voice endorses Kevin Smith to be our GOP Senate nominee.