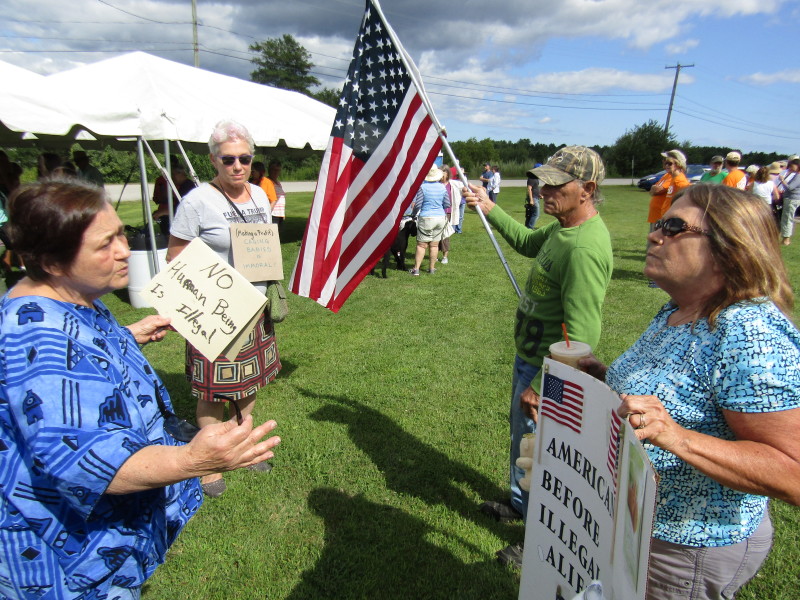 James Cinnamond of Rochester and Holly Trice of Rollinsford, right, and members of the vigil exchange heated words on immigration Saturday outside the Strafford County Jail. (Rochester Voice photo)

DOVER - James Cinnamond of Rochester said he has all the empathy in the world for immigrants wanting to come to the United States in hopes of a better life, but taxpayer money should be going to take care of this country's downtrodden before those entering illegally.

Cinnamond, along with Holly Trice of Rollinsford, showed up at the Strafford County House of Correction on Saturday as counter-protesters to a crowd of about 400 holding a vigil for immigrant justice after marching from Massachusetts, New Hampshire, Vermont and Maine to the jail, which houses about 100 ICE and CBP detainees.

"We've got a terrible homeless problem in Rochester and they're closing all the shelters," Cinnamond said as several vigil members berated him and Trice. "Where's the money for that."

Despite the harsh words between the pair and several vigil holders, the event was overwhelmingly peaceful.

The Solidarity March for immigrant justice comprised groups that had marched from the four states to the Maranathat Indonesian Church of Christ in Madbury where they joined together Saturday afternoon for the final six-mile trek to the jail, where a tent and bottled water were provided by the county.

About 100 who showed up at the vigil site about an hour before the marchers arrived agreed that immigrant justice was lacking in this country, but not all said they were for open borders.

"We need borders," said Pat Shearer of Lynn. "But with these detention centers we're showing no respect for human dignity. We are a country based on immigration, and they bring a lot to our country."

Eva Castillo of Manchester, who emigrated from Venezuela and is part of the Immigrant Solidarity Network of New Hampshire, said the vigil had grown from the 100 or so who marched last year. She said the goals of her group are to end the detention and deportation of immigrants.

"We want to defund hate, use tax dollars to benefit the community and change the racist, xenophobic laws we now have on immigration," she said

The state that sent the largest group was Massachusetts, whose marchers left from the JFK Building in Boston on Wednesday carrying a child-sized coffin to memorialize the seven immigrant children who died while in ICE custody this year.

The silence and slow pace of the procession was by design, with marchers putting a finger to their lips to signal their intent to not speak with media or onlookers as they walked slowly to the beat of a single drum.

The Rev. Teddy Hickman-Maynard, an associate pastor at the Bethel African Methodist Episcopal Church of Lynn, said Christianity calls on us to "love the oppressed and dispossessed."

"Our faith tells us to welcome the stranger," he said. "And how we treat immigrants as a policy matter is a reflection of our values and ideals."