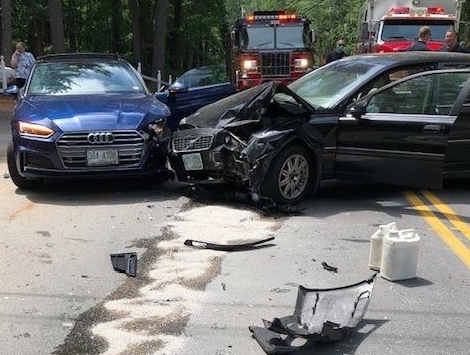 ROCHESTER - A Somersworth man was injured in a three-vehicle collision on Whitehouse Road on Thursday.

The crash occurred around 2 p.m. at the entrance to Amazon Park when police say a 2004 Volvo sedan driven by Leo P. Mailhot, 64, of Rochester, was traveling north on Whitehouse Road and making a left turn into the park when he collided with a 2018 Audi A5 driven by Amanda Bugbee 46, of Somersworth, who was traveling south on Whitehouse.

The collision forced the Audi into a third vehicle, a 2018 Hyundai Santa Fe driven by Albert F. Gabert, 44, of Rochester, who was stopped waiting to exit Amazon Park.

Bugbee was taken to Wentworth-Douglass Hospital by Frisbie EMS with what were described as nonlife threatening injuries. Mailhot and Gabert were not injured.

Whitehouse Road was shut down for a short time while the Volvo and Audi were towed from the scene. Gabert was able to drive his vehicle away.

The accident remains under investigation.