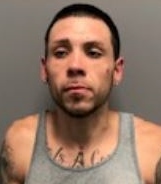 SOMERSWORTH - A city man was arrested on reckless conduct and resisting arrest charges on Wednesday after leading police on a high speed chase that ended at his mom's home where he was found hiding in her ceiling.

The incident unfolded around 10:15 a.m. when a New Hampshire State Police trooper noticed a black 2007 Chrysler Aspen driving recklessly through the intersection at Indian Brook Drive and Route 108 in Dover, police say.

The trooper attempted to stop the vehicle, but the driver of the Aspen, later identified as Timothy W. Smith, 29, of Somersworth, continued on.

Police said the vehicle reached speeds in excess of 80 mph on Route 108. On the way, police say Smith failed to yield for an ambulance transporting a patient. The trooper backed off the chase due to safety concerns.

Meanwhile, Somersworth Police, unaware the vehicle fled from State Police, attempted to stop the vehicle, which turned in to Reagan Estates and pulled behind a residence at 12 Dudley Court. Three occupants fled from the vehicle.

Police learned the same vehicle and occupants had fled from Dover Police after an attempted stop on Central Avenue in Dover.

Two passengers were quickly apprehended, police said, but it was learned that Smith was inside 12 Dudley Court, his mother's home.

It was then learned that Smith was hiding in the ceiling. After a brief standoff, Smith came out peacefully and surrendered without incident.

Smith refused bail and is being held at Strafford County Jail awaiting arraignment. He was charged by State Police with reckless conduct, disobeying a police officer, resisting arrest, operating after suspension and failing to yield to an emergency vehicle. Further charges by Somersworth and Dover police departments are anticipated.