Sorry Tom, the gnome's name is no longer Tom Terrific, it's Mighty Mac 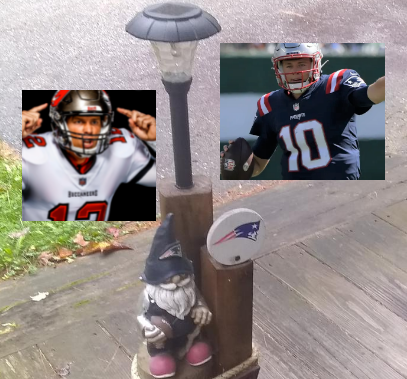 Some five years ago I bought a - well I don't exactly know what you call it, maybe a welcome gnome - and while it was a Patriots welcome gnome, it didn't take long for it to be dubbed "Brady," you know, as in Tom Brady, as in Tom Terrific, who owns seven Super Bowl rings, whose star soars like an eagle while he sleeps with a Gisele.

When Brady left the Patriots last year amid the immaculate deception, joined shortly thereafter by the then-retiring, now reviving Rob Gronkowski, I was heartbroken after 20 years of Brady bliss.

But there was some promise in this Mac Jones, who has shown an almost Brady-like inclination to learn, paying attention to details and pursuing a work ethic and diligence that is demanded by Coach Belichick.

So last year we endured the suddenly mediocre performance of New England's team, continuing to cheer them on through their un-Patriot like season, while always keeping an eye on our erstwhile hero Tom.

When the Pats foundered and the Bucs fought their way into the playoffs, we were all in.

And when the Bucs found themselves playing the Chiefs in the Super Bowl we could almost pretend it was the Patriots, not the Bucs, playing for the Lombardi Trophy, especially after Brady connected with Gronk on two touchdowns.

Which brings us to today, when Brady's and Gronk's bittersweet return to Foxborough both thrills and torments us.

And there are questions.

Can salvation still be salvaged from this imbroglio?

Can we get by this trauma?

How do we move on?

First, it's comforting to know the Bucs aren't in our division, so at least we don't have to play them twice a year.

If we do play them twice this year, at least we're in the Super Bowl.

For me, I can tell you this household will be rooting for Mac Jones, he's our man now and we support him.

This week Brady said at a news conference, he had no comment on Mac, saying only, "I haven't seen him much at all."

Brady has a habit of often not paying much attention to the game when his defense is on the field, but I hope he occasionally looks up at the scoreboard tonight and sees that the young buck quarterbacking the Pats is doing a number on Brady's Bucs.

And make no mistake about it. That Patriots gnome on my back porch is no longer Brady. He's Mighty Mac.