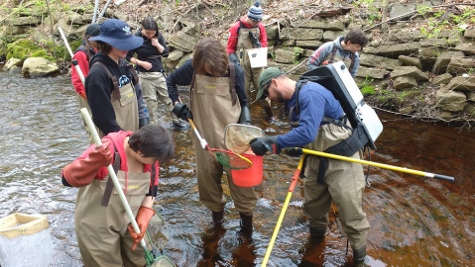 ROCHESTER - When Spaulding High School environmental science teacher Darren Scopel took his students on a year-end field trip to three of Rochester's streams, they began what he believes will be the start of a long-term monitoring project that will have a lasting impact on the community.

In early June, Scopel and his students accompanied Rochester Conservation Commission Chairman and New Hampshire Fish and Game Biologists Mike Dionne and Matt Carpenter to Willow Brook, Hurd Brook and an unnamed brook in the city, where they tested the quality of the water and generated counts of a sample of each stream's fish population.

Prior to their visit, the students used Rochester's online GIS map to predict what they believed the water quality for each stream would be based on the surrounding land use, and then compared those hypotheses against the data they collected.

"I'm a big fan of getting kids out and doing hands-on work because it allows them to apply what they learned in the classroom in a real-life situation," Scopel said. "We can read about streams in faraway places like Costa Rica or Coloardo, but learning about the streams in their own town carries a lot more weight."

The field trip, which some students called their favorite of their school careers, has set the tone for what will eventually become a regular outing that will allow future environmental science students to build on the work of their predecessors.

While at the brooks, student biologists used a backpack electroshocker provided by NH Fish and Game to temporarily stun and count the fish before returning them to the water. They were surprised to find that one of the three was totally devoid of fish despite its high water quality and hospitable environment.

"We think we have some ideas as to why there might not be fish there," Scopel said. "But that's a real question that kids next year can answer."

The students found three different species of fish in Willow Brook-- eastern brook trout, common white sucker, and fallfish -- while they discovered only brook trout in Hurd Brook and none in an unnamed tributary to Willow Brook off Lowell Street.

For each of the streams, the class also collected data about stream-flow, water chemistry, aquatic insects and the physical and biological habitat within and surrounding the stream.

Those findings will have practical use in the years to come for students, natural resources professionals and the city of Rochester.

"This will be an ongoing community project that will answer real questions," Scopel said. "We are using the same techniques that scientists from the NH Department of Environmental Services and NH Fish and Game use, so they'll be able to use our data in their own work."

Scopel received grants from Albany International and the New Hampshire Association of Conservation Commissions, which will help sustain the project from year to year.