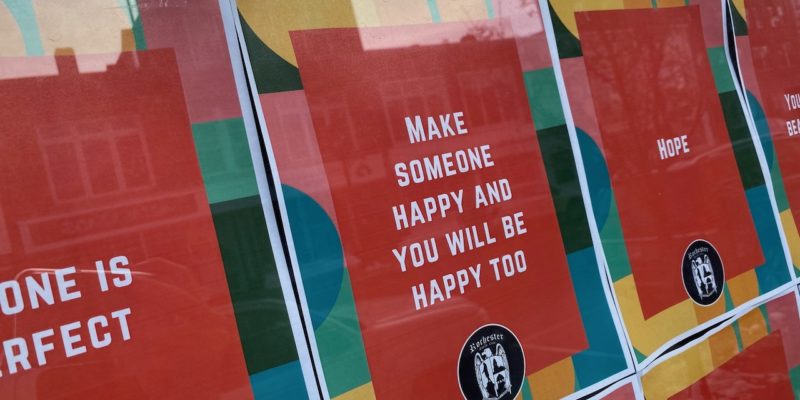 Some of the messages of hope created. (City of Rochester photo)

"As part of Spaulding's Principal's Council group, we worked together to organize a little 'pick-me-up' for the community," said Natalie Meulenbroek, Spaulding High School student leader. "We know how difficult life has been lately, for students, essential workers, and everyone struggling to make ends meet during the pandemic. Sometimes words of affirmation or a little message that you're appreciated can go a long way, and we wanted to spread that around Rochester."

The student-made posters and messages are on display at Spaulding High School in the Cafeteria windows and in the former Hoffman Furniture building on North Main Street.

The Rochester Social Club, an active community group that promotes volunteerism, also created posters for the windows of another empty store window next to Riverstones Custom Framing.

"Part of the mission of the Rochester Social Club is to create positive news and conversation about our city," said Jacob Beal, RSC president. "Positivity breeds positivity and we want everyone in our community to feel valuable. Thanks to a collaboration with the city's Community Engagement Manager and Economic Development Department, we are able to make these 'signs of positivity' available to everyone."

The city's Community Engagement Manager Matt Wyatt described the separate projects as "coincidental" and "just what we need right now."

"Great minds think alike and I'm happy to work with these two respective groups to bring their projects to life," said Wyatt. "It's been a tough year and it's good to see some positivity. It's nice to see people looking out for one another."

Both displays will be on view for the month of January.

This story was produced by the City of Rochester