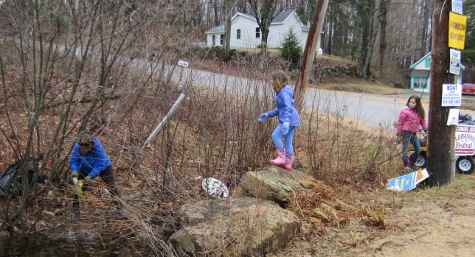 From left, Dede Brunelle of Champion Street removes debris, including a hubcap, from a gully wash at the bottom of Prospect Hill, while Emily Bruce and Emma Walker, both 8 and students at Lebanon Elementary, look on ready to help. (Lebanon Voice photos)

COPYRIGHT 2017 ©Area residents took it to the streets on Saturday as Rochester, Milton and Lebanon all held Earth Day cleanups to remove a winter's worth of trash from roadway shoulders.

In Rochester, organizers actually performed three separate cleanups, including efforts along the banks of the Cocheco River, one that targeted specific downtown areas and another on neighborhood streets.

In Lebanon during a cleanup organized by Lebanon Maine Truth Seekers, Tiger Scouts and Girl Scouts cleaned the Indian Lake Shore Drive roadways while scores of other volunteers roamed Lebanon roads picking up trash and bagging it for delivery to the Lebanon Transfer Station.

An intrepid gang of three took on one of the most trashed area of town in West Lebanon cleaning the area around the canoe and kayak launch site at the bottom of Prospect Hill.

"It was pretty bad over there," said cleanup volunteer Dede Brunelle, who along with two others were found cleaning the shoulders of Champion Street including even going into the woods to remove trash from behind a spillway.

Helping Brunelle were eight-year-olds Emily Bruce and Emma Walker, who truly captured the spirit of the day when asked what was the best part about Cleanup Day in Lebanon.

"You get to help people all over your town," she said not missing a beat.

After the cleanup volunteers were treated to lunch and a concert back at Lebanon Town Offices where musician Clair Bridgewater performed to the delight of the crowd.

Just like Lebanon, volunteers in Milton and Rochester were all treated to free barbecue lunches, which together with the rampant community spirit, managed to brighten a gloomy, raw day in the Northern Seacoast.