Spitters beware: Showing your disgust with saliva may mean a year in jail 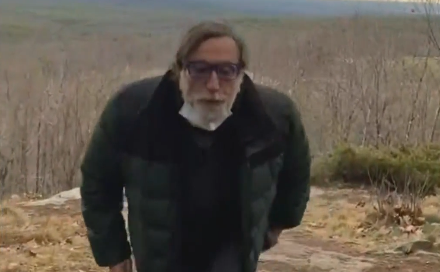 The man accused of spitting at two women hikers, Hale Powell, captured in the act on cellphone video.

ROCHESTER - If Rochester Police ever catch the guy who allegedly spit at another man during a road rage incident in the city's downtown last Sunday he could be looking at up to a year in jail.

The same could be in store for a Massachusetts man who spit at two women hiking Massachusett's Midstate Trail last week.

Hale Powell, 71, of Westford, the man captured on video confronting the two women, was upset they weren't wearing masks and spit at them several times.

He can also be heard saying, "I have COVID" and "I tested positive" prior to spitting at the pair.

Rochester Police Capt. Todd Pinkham said if the man alleged to have spit during Sunday's road rage incident were arrested, he would be facing up to a year in jail, since spitting at someone is considered simple assault, a Class A misdemeanor.

Powell was arraigned Tuesday afternoon. He's charged with assault and battery and false threat of a biological agent. During an arraignment the judge ordered him to get a COVID test, which he grudgingly agreed to.