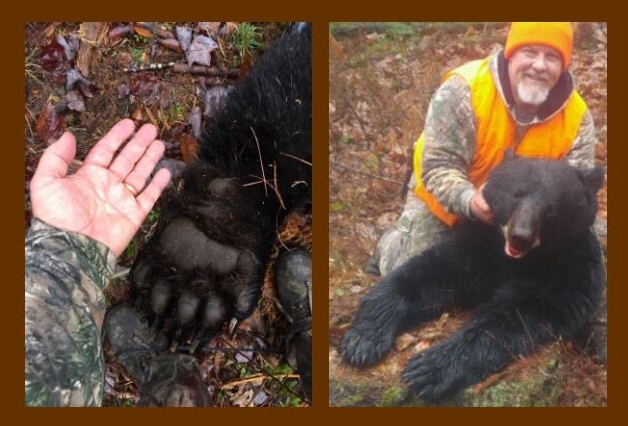 WEST LEBANON, Maine - It's been a week since Dean Johnson of Springvale bagged a trophy bear in West Lebanon, and he's still living the dream today.

"It was unbelievable," Johnson said today. "Such an impressive animal."

Johnson said he was out hunting deer from a tree stand in the Prospect Hill area last Wednesday when he decided to take a break.

"It was chilly and raining hard, and after a couple of hours I came down to stretch my legs," he recounted. "I looked up and here he comes, this big black bear near a stream not too far from the river."

Johnson said he pulled it up on his scope, but it was all clouded from the mist that was falling. Still he couldn't wait, so he did the best he could and fired off a shot from about 30 yards off.

"The first shot rolled him," he said, "and he ran around some bushes. I fired again and got him one more time, missed, then got him again and that did it."

He said he still advanced toward the bruin carefully, not sure it might not make a last charge at him.

He knew he had a big one, but was still surprised when it weighed in at 287 pounds, a pretty big one for Southwest Maine, much of which like Lebanon is in Maine Wildlife Management District 20.

He said he learned from Maine's Department of Inland Fisheries and Wildlife that only two bears had been harvested in Lebanon in the last 10 years.

"It's rare they get that big in these parts," Johnson said, estimating the bear might be around 10 years old in his opinion.

He said he's still waiting to hear from Fish and Game, who can tell its exact age by analyzing one of its teeth which they doing now, Johnson said. They'll also determine if it could be certified to qualify for the record books for this area.

He said the bear is already being worked on at a local butcher and the fur and head will be used to make a nice rug.

"I've never had bear meat and I've heard some mixed reviews, but I guess I'll find out for myself," he said.

Johnson added the experience was overwhelming for him and very emotional.

"For me, this was a once in a lifetime experience, and I wanted to document it for my grandkids and their grandkids that this happened," he said.

Fish and Game officials were not immediately available today for comment.