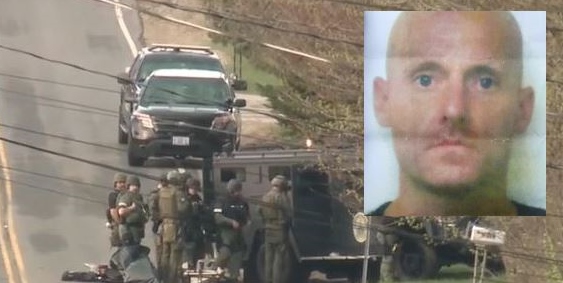 SOMERSWORTH - An 18-hour SWAT-team standoff at a Somersworth apartment house that ended peacefully yielded five arrests by the time it ended Friday afternoon, but one of the subject police were most interested in is still apparently at large.

Those taken into custody included Samantha J. Beyer-Morele, 27, and Brett Turgeon, 29, both of 219 Green St., Apt. B, on probation/parole warrants, a transient, Christopher Beckwith, 39, for a drug court violation, Brianna Y. Cruz, 19, of 108 Franklin St., Apt. C, Somersworth, for alleged drug possession and Aiyla M. Griffin, 25, of 219 Green St., Apt. B, on drug possession charges and a bench warrant for probation/parole violation.

Meanwhile, police continue today to seek the whereabouts of Robert Twombley, 39, of 219 Green St., Apt. C., whom witnesses said police were urging on a bullhorn to come out of the apartment house during the standoff.

The standoff began around 8:30 p.m. on Thursday and quickly escalated with the knowledge by police that several firearms may be within the four-unit apartment house in a residential area of the city located between Indigo Hill and Stackpole roads.
After the building was cleared with the help of a robot that showed the house to be free of additional threats, police went in to secure the scene while search warrants were executed.

The incident began as a joint exercise by Somersworth police, the Strafford County Drug Task Force and the U.S. Marshals Service to execute search warrants for suspected drug activity at the apartment house.
Responders to the standoff included the Strafford County SWAT team, the Seacoast Emergency Response Team, and a State Police SWAT team.
The incident closed Green Street between Indigo Hill and Stackpole roads, causing huge headaches for drivers traveling between Somersworth and Dover.

Somersworth Police are looking to speak with Twombly. Anyone who knows where he is or how to contact him is urged to call ihem at 692-3131.