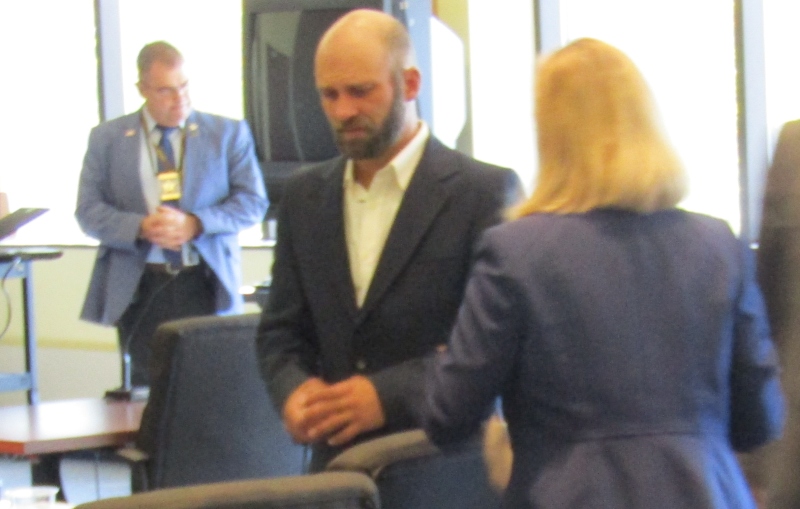 A visibly distraught Lawrence Douglas during a recess in his October manslaughter trial that ended with a hung jury. (Rochester Voice file photos)

DOVER - A Rochester man whose manslaughter and DWI trial involving the death of his best friend ended in a hung jury in October is facing a retrial in the case, Strafford County Attorney Tom Velardi said earlier this week.

Velardi told The Rochester Voice that his office will be conducting voluntary interviews with jury members to get their feedback before making a final determination, however, as it stands now, a retrial is planned.

Lawrence Douglas, 40, of Lafayette St., is accused of causing the death of his best friend, James Gosselin, 54, who police say was a passenger in Douglas' Subaru Forester when the car crashed near Exit 15 on the Spaulding on April 15, 2016.

Douglas was charged with manslaughter and DWI in the crash. He is facing up to 30 years in state prison if found guilty.

During the trial, Douglas' family and friends as well as co-workers from Pit Bull Painting were in the courtroom to support him. Douglas, himself, grew very emotional during testimony, oftentimes breaking down in sobs as he listened.

Velardi said on Monday that the jurors will only be interviewed if they approve.

"We are very respectful of what this jury decided," Velardi said. "This is strictly voluntary, but we want to talk to them and see if they want to share their thoughts on the trial."

Velardi said the plan is to move forward with retrial, but the decision will not be made lightly.

"We have to believe we can prove that a crime was committed, and if we can, prove who committed the crime," he said.

He added, "State police said their probe showed he was one and a half the legal limit of alcohol, had drugs in his system and was going 90 mph at the time of the crash. We are not going to walk away if someone should be held responsible, but if it can't be proved by a reasonable doubt, we don't want to spend more taxpayer money.

"Till then I owe it to the decedent and this community where someone lost their life."

During the weeklong trial the defense provided an alternative theory that weight from paint cans and painting equipment caused the vehicle to bounce off a median barrier and flip onto the driver's side, proving Gosselin was driving.

A state witness rebutted the theory saying that the car yawed prior to striking the barrier and flipped onto the passenger side after it made contact.

The differentiation is key as Gosselin's head came in contact with the pavement as it skidded across the highway.

Neither man was wearing a seat belt.

Velardi said he could not divulge what the vote in the jury room was. A unanimous vote is necessary to deliver a true verdict.