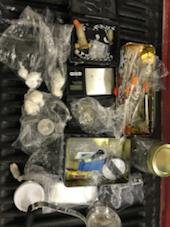 Some of the drugs State Police confiscated in overnight arrests. (NHSP photo)

Troopers targeted impaired, aggressive and hazardous drivers during these hours in addition to enforcing all other aspects of both motor vehicle and criminal law, according to a state police press release sent out today.

The patrols resulted in several dozen motor vehicle contacts, including eight arrests for DUI and Possession/Transporting Drugs in a Motor Vehicle, etc. Two drug seizures were also made resulting in the confiscation of Cocaine, Psilocybin Mushrooms and over 30 grams of Fentanyl.

Charges: Driving Under the Influence, Possession of a Controlled Substance X3, Open Container

Charges: Driving Under the Influence

Charges: Driving Under the Influence

"New Hampshire has some of the most aggressive laws in the country to fight impaired driving," the press release noted, "And the law enforcement community will use those tools to their fullest extent to make sure our citizens and visitors are safe when operating their vehicles on our roadways."